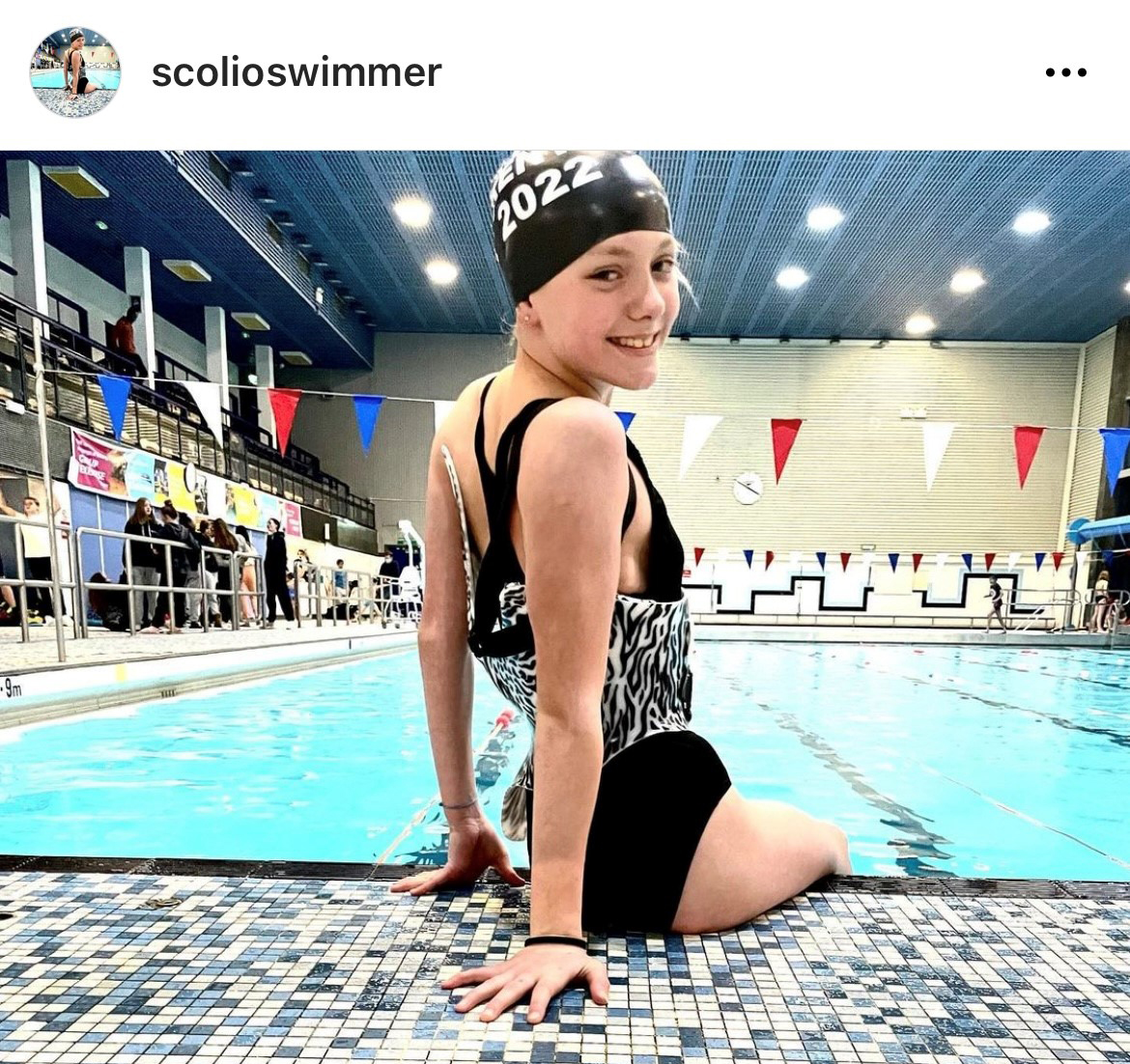 Sophie at the swimming pool in her LOC Scoliosis Brace

International Scoliosis Awareness Day is on the 26th of June and Sophie has already been doing her bit to raise awareness of the condition. Here is Kat, Sophie’s mum, talking about Sophie’s journey to date.

“We first noticed that Sophie had problems with her back in February. She had been complaining about some back pains, but we initially put it down to excessive hockey playing for her local hockey club and a very intense sports schedule at school. One evening the pain was bothering Sophie a lot and I looked at her back in greater detail. At first, nothing seemed unusual when she was sitting in front of me but when she stood and tried touching the floor, I realised that not only was there a curve but also a hump on the upper right part of her body. The next morning, I made an urgent GP appointment with our local practice. My husband and I were pretty sure what it was because there is a family history of scoliosis and we wanted to act fast. Sophie’s Nan had been diagnosed with scoliosis when she was thirteen and her curve was so severe that she had spinal fusion surgery a few years later. Our GP confirmed that Sophie had scoliosis and she was referred for an X-ray. However, he warned us that this might take some time as the NHS was still catching up with things because of Covid and Sophie’s curve was relatively mild so would not be regarded as an urgent case.

Because of the family history, we knew that scoliosis could develop quickly in adolescents so we wanted to act quickly. I asked our GP for a copy of his scan referral letter and took Sophie to have a private x-ray the following week. In the meantime, I had done some thorough research on the Internet on possibilities for treatment and consulted medical friends back in Poland who suggested that bracing was the best way forward. I continued to look at reviews and discussed with friends and colleagues with experience in physiotherapy and podiatry and the name London Orthotic Consultancy popped up. I was really interested in a clinic that offered a complete service, manufacturing its own scoliosis brace on-site at its Kingston clinic. Incredibly LOC had just introduced a same-day service which meant that Sophie was assessed in the morning and had her bespoke LOC Scoliosis Brace fitted later the same day!! Apart from our natural desire to get things moving it made sense in terms of travelling as we were coming to London from the south-east of Kent. Sophie was the first patient to use LOC’s one-stop clinic appointment system for scoliosis.

Our experience on the day was brilliant, the admin team worked very efficiently with us and Anna, LOC’s lead scoliosis clinician was very professional, friendly and kind. Sophie was impressed with the positive attitude from all the staff. She also felt she was being listened to. Fine adjustments to the brace were made for comfort and Sophie came home wearing her brace.

In the beginning, Sophie was self-conscious and we were adding extra padding to her school blazers and jackets but suddenly on holiday over Easter, she just embraced it. She wears her scoliosis brace over her school top and outside school also goes out with Marvin (her name for the brace) outside her clothing. She hasn’t been bullied and she’s happy to respond to questions. She is doing a talk to her schoolmates about scoliosis awareness this month and she turned her recent biology homework into a reflection on the condition. She has an Instagram account – scolioswimmer - where she exchanges stories about her experiences wearing a brace with kids around the world – she has found this very empowering.

Talking of swimming, Sophie was afraid of water! She started swimming late - age 7 and it took a while for her to even put her face under water. She now swims around 10h a week at school and at Maidstone Swimming club - she is in the competitive squad attending many galas. Recently she took part in the IAPS - National Girls Swimming Finals. She wears Marvin in the pool and after - educating kids and sometimes parents. She wears her scoliosis brace proudly. She’s happy to chat with anxious children and her view is that it better to wear Marvin for a while than rods for the rest of her life.”

Anna Courtney, Sophie’s clinician and lead scoliosis orthotist at LOC, comments: “Sophie presented with a right dominant thoracic scoliosis measuring 26 degrees. Because of her age, relative skeletal immaturity and family history there was a high risk of progression, greater than 90% using published algorithms, which is why bracing was such a sensible option. She immediately tolerated the brace well which is always a good sign for compliance to the necessary wearing regime”.

Finally, a word from Sophie herself:

“Having scoliosis is not the end of the world and bracing is really not as bad as one fears. There are inevitably ups and downs but the end of the road is worth fighting for. Wear your brace with pride and try and find kids of your own age going through the same kind of experience.” 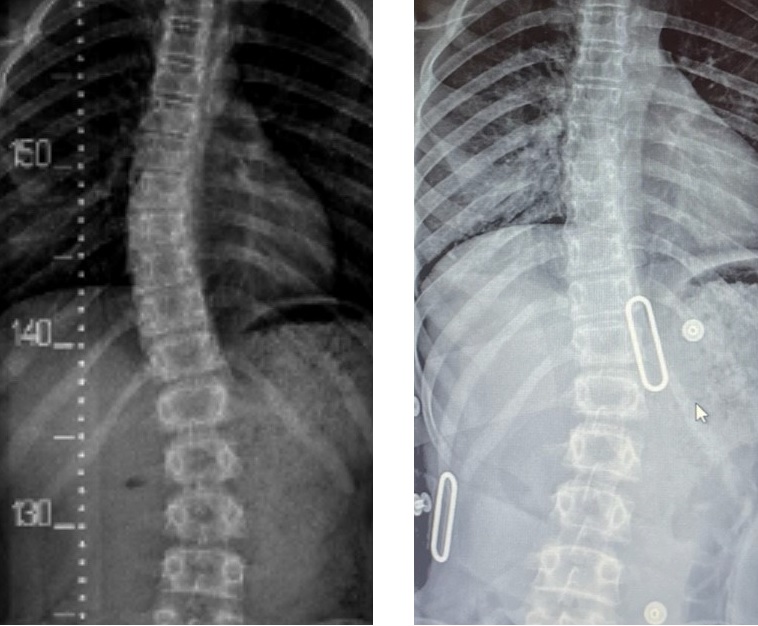 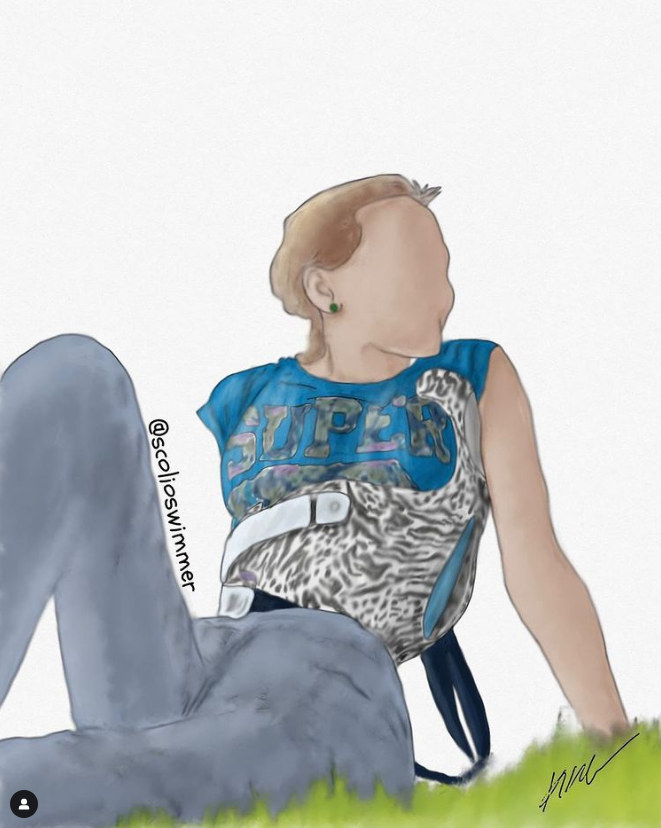 Artist depiction of Sophie: artwork by @bent.swiss_scoliosis_art on Instagram

Find out more information about the LOC Scoliosis Brace

If you think your child, adolescent or adult family member has scoliosis, you can contact LOC directly to arrange a consultation at one of our scoliosis clinics.

Are you concerned that your child may have scoliosis?

Especially in young people, spotting the early signs of scoliosis is important – as is seeking early treatment. These are the warning signs to look out for: 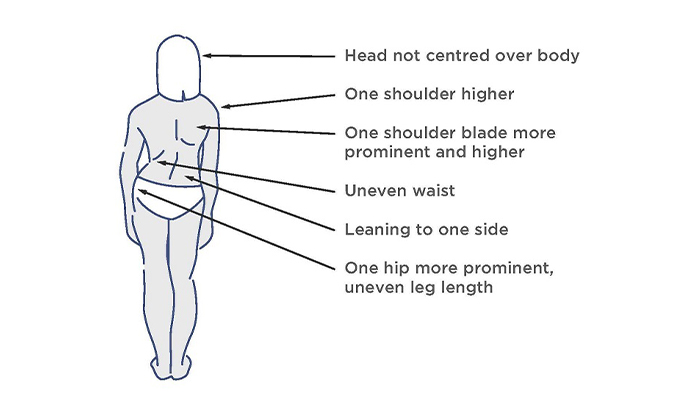 You can find out more about the visual signs of scoliosis here.