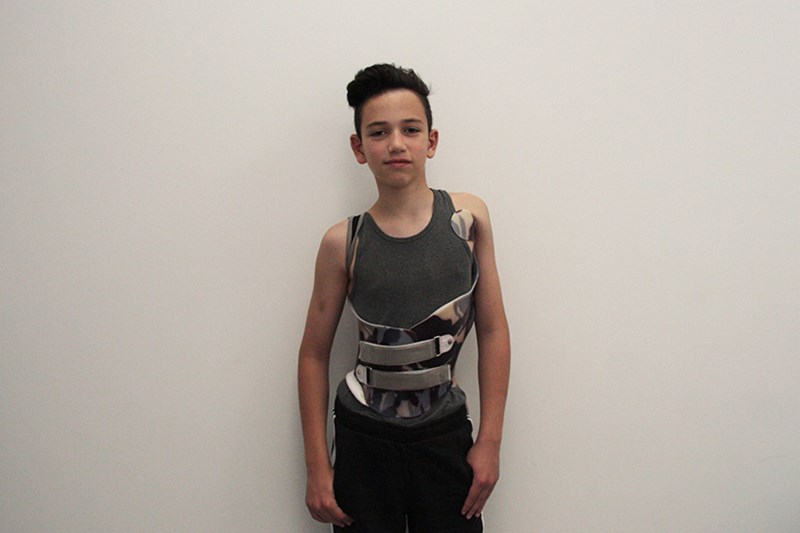 Like many other 12-year-old boys, Rares likes playing sport and computer games. He lives in Surrey with his Romanian parents and life was pretty normal until a friend at school noticed something unusual in his appearance: “I was doing PE and I was getting changed back into my school uniform when one of my mates noticed a curve in my back. I went home and told my mum and it just started from there,” says Rares. ‘It’ was his diagnosis and subsequent treatment for adolescent idiopathic scoliosis, abnormal twisting and curvature of the spine that can progress quickly when the skeleton is still growing or during hormonal changes. Rares, it was soon revealed, had Cobb angles of 52֯ and 24֯ in his spine (for any adolescent patient with a Cobb curve above 25֯  which may continue to increase, we recommend spinal bracing combined with specific exercises).

This came as quite a surprise to the family and particularly Rares, who hadn’t experienced any symptoms. “Before I knew I had it, I never felt pain,” he says. Following Rares’s diagnosis, his parents began researching the condition and were keen to pursue treatment immediately. However, long waiting lists on the NHS meant that non-surgical treatment, their preferred route, would not begin any time soon.

As part of their research, they learnt about The London Orthotic Consultancy and made an appointment for Rares to see a clinician here. Following scans, he was fitted with the Cheneau-Gensingen brace, a bespoke orthotic that improves the shape of the curve whilst the spine is flexible and will continue to do so until the patient is skeletally mature (in Rares’s case, by around age 18). If started young enough, and depending upon maturity and magnitude of the curvature, scoliosis bracing treatment can reduce the curve and Cobb angle and significantly reduce the need for surgery in later life.

As well as wearing the brace, Rares regularly sees Schroth physiotherapist, who prescribed an individual exercise programme of specialist physiotherapy techniques that work in tandem with the Cheneau-Gensingen brace, normalising the posture through static, dynamic and stabilising control, improve muscle lengths and maintaining spinal corrections through exercising in over-correction.

Rares wears his Cheneau-Gensingen brace for more than 23 hours a day, only removing it for around 45 minutes at lunchtime so he can play sport. “It was hard at the start,” he says, “but you get used to it eventually – it’s still uncomfortable but it’s bearable now. I used to get pains and rashes everywhere, but now actually I don’t find it that bad anymore.” Though, he adds: “It’s hard at the moment because it’s summer and I have to wear a vest as well, so it gets quite sweaty.” 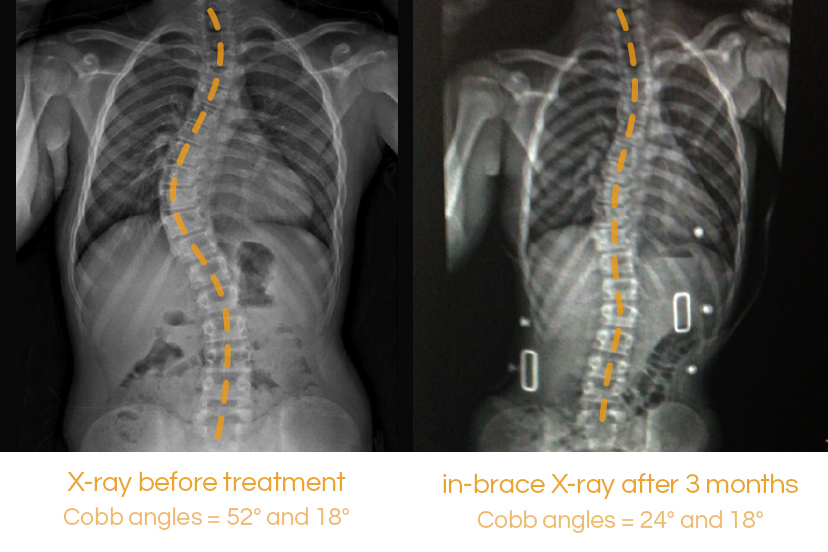 As well as the initial physical discomfort, Rares has also had to contend with the inevitable attention at school, but he just brushes it off with humour. “They say that I’m a hunchback. I actually kind of agree so I just say, ‘Yeah, I know.’ It’s pretty true, though.” And, he’s had a great deal of support from his friends. “They all felt bad for me at the start, but they got used to it and if I need help with anything, they will help,” he says.

Despite his youth, Rares has shown great maturity in his attitude to his treatment and a steadfast commitment to following it to the letter.  “You have to keep in mind that if you wear it as much as you can now, you don’t have to wear it as much later,” he says. With most teens focused on the ‘right now’, this shows impressive foresight.

Rares’s dedication also includes religiously following his exercise routine. “Each one is three times a week for 10 minutes. It’s not that hard depending on which one you do, and it gets easier,” he says. He even has advice for other children going through the same treatment: “Do your physio, don’t be lazy. There have been times when I’ve been lazy, but you have to do the exercises so your back gets better. Don’t give up. It’s hard at the start, but it gets easier.” 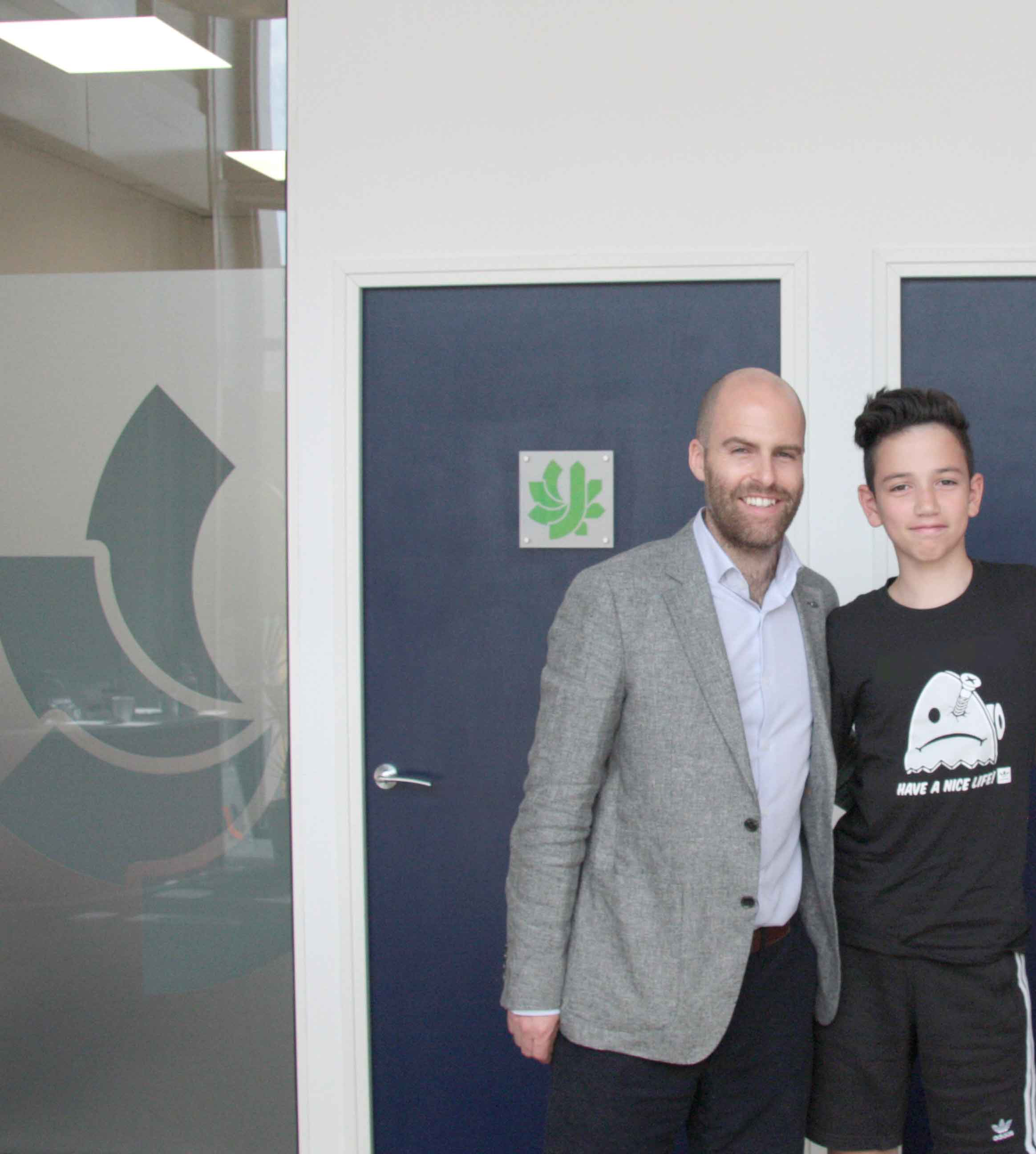 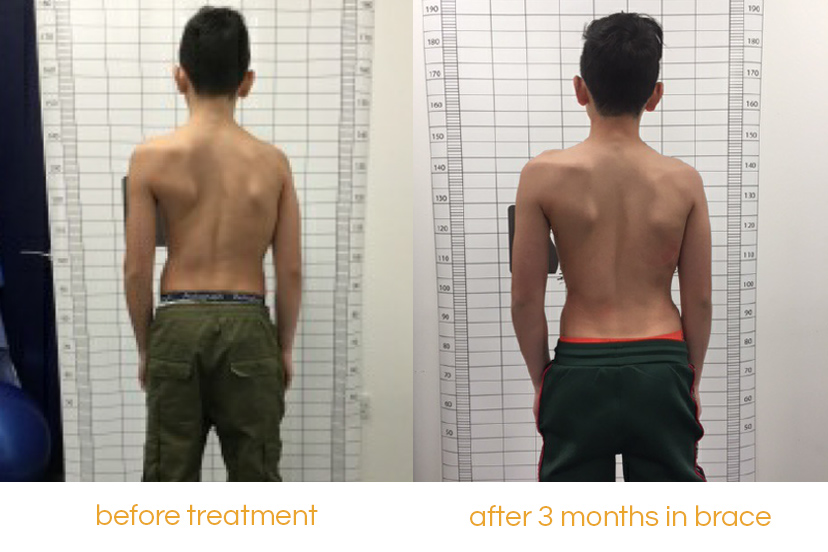 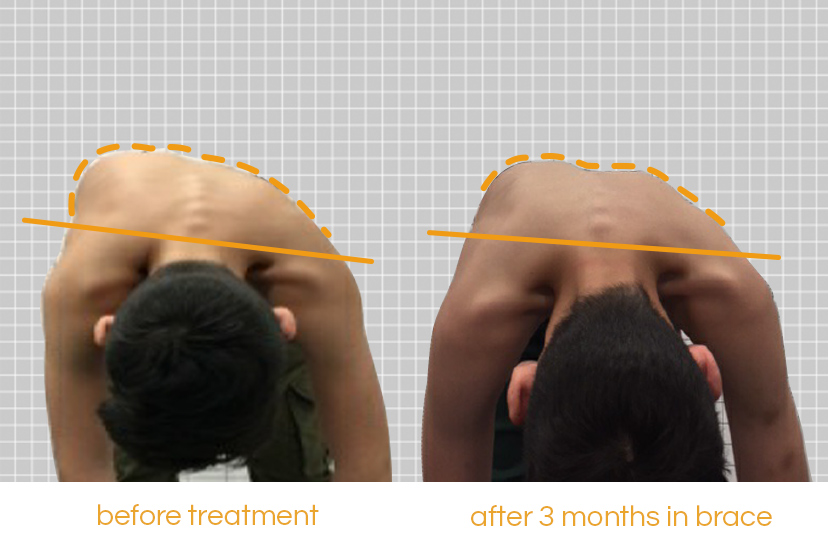 His father is very proud of Rares’s attitude, saying: “He’s been very positive since the first day.” And this determination has certainly paid off. In just two months, Rares’s Cobb angle has reduced from 52֯ to 24֯  in brace and his ribcage has de-rotated from 18֯ to 12֯, so the rib hump has significantly improved.

LOC are delighted with the results and credits Rares himself with much of the treatment’s success: “Rares is a very motivated and positive patient who is dedicated to the treatment and we are pleased with his results,” she says. As he is growing a lot, she estimates he will need a new brace later in the year or early next year. 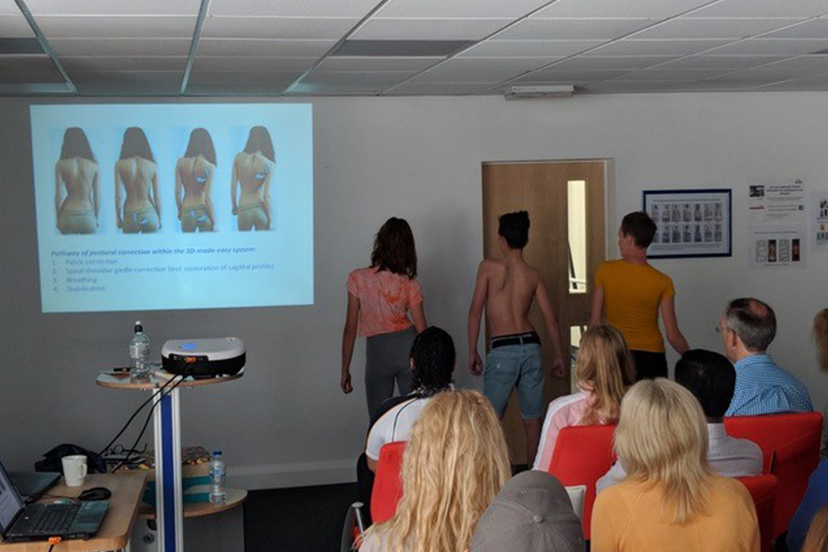 Above: Rares helps with a demonstration as part of our summer Scoliosis Open Day

Rares and his family could not be happier with all the team at the LOC, who Rares describes as more like friends than healthcare professionals. As well as his sessions, he sees other orthotic clinicians who monitor the progress of his brace treatment. His parents have been impressed by the personal care the staff have shown the family, as well as their willingness to answer questions at any time. Having LOC just a WhatsApp conversation away has been a huge help, especially at the beginning, when they had many queries.

Rares’s father advises other parents in a similar situation: “Don’t wait.  It’s about [the children] because they are more likely to be confident in their late teens if you act quickly and support them. We have been lucky because we understand the condition well. That’s one of the main things to be honest.”

Prognosis is good for Rares and it is hoped that we can reduce his cobb angle significantly as he continues to grow by the age of 18. He is a perfect of example of how putting in the time and effort to really see the treatment through, despite any discomfort initially, he can reap significant rewards.  “It was hard work,” he says, “but it pays off in the end.”

Rares continues to progress with his bracing treatment. After wearing his first Cheneau-Gensingen brace for 10 months, his out-of-brace X-rays (photos below) reveal that his thoracic curve cobb angle has reduced from 52 to 35 degrees, with his lumbar curve also going down from 20 to 17 degrees. He is now in his second brace which will hopefully see his results improve even further. 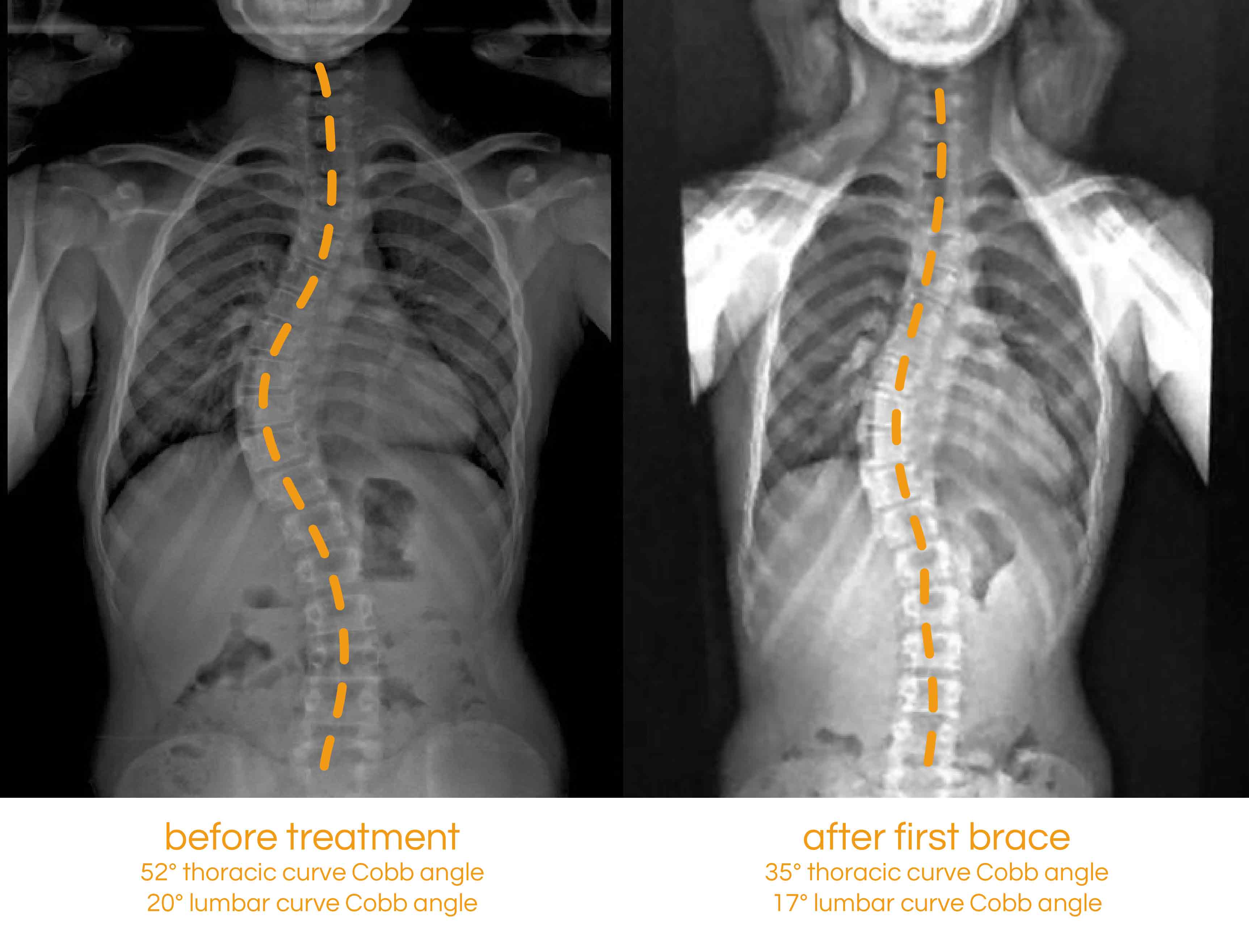 To find out more about LOC’s non-surgical treatment for adolescent idiopathic scoliosis, head to our Scoliosis Clinic page. If you would like to book an appointment with one of our scoliosis team, get in touch today by using the email enquiry form at the top of this page, or give the clinic a call on 020 8974 9989.