We are now offering a same-day scoliosis service

What is Adolescent Idiopathic Scoliosis?

Adolescent idiopathic scoliosis represents over 80% of all diagnosed cases of scoliosis in children. Scoliosis can progress quickly when the skeleton is still growing or during hormonal changes. Skeletal maturity occurs at the age of approximately 14 - 17 for females and 18 - 22 for males when the bones and spine are no longer malleable. If started young enough and depending upon maturity and magnitude of curvature, scoliosis bracing treatment can reduce the curve and Cobb angle and significantly reduce the requirement for surgery in later life.

Visible improvements in posture and rib hump after just 4 weeks of wearing the Cheneau-Gensingen brace. Mild cases of scoliosis may self-correct as a child grows. However, it is important that any existing curvature is monitored closely to check progression, particularly during periods of rapid growth during puberty.

For more serious cases (Cobb angles in excess of 25) we recommend non-surgical treatment with our bespoke version of the Cheneau brace - the LOC Scoliosis Brace. 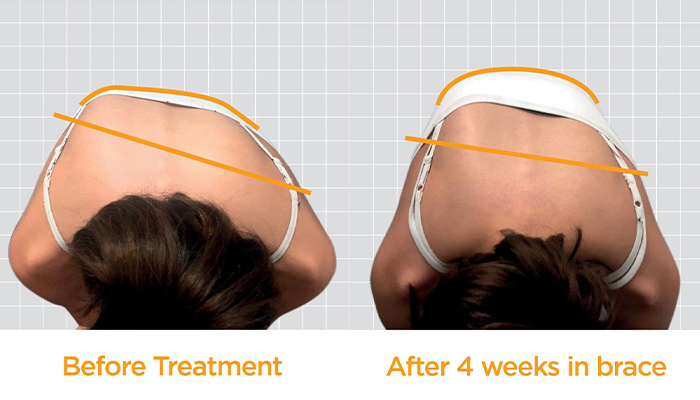 The patient pictured was diagnosed with adolescent idiopathic scoliosis at the age of 14 during a rapid growth phase. She had a thoracic curve of 35 degrees and was referred by a specialist for a spinal brace to manage her condition conservatively. After 6 weeks of wearing a bespoke Cheneau-Gensingen brace her curve in-brace had reduced to 12 degrees (see x-rays & photos). 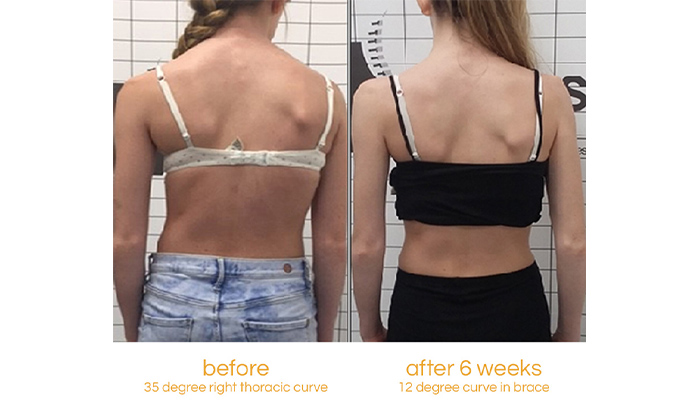 She also had some rotation of her thoracic curve, which measured 13 degrees. After 6 weeks this had reduced to 8 degrees out of brace. Postural improvements can be seen from the above photo. She still has a way to go and continues to wear the brace whilst she is growing and maturing. 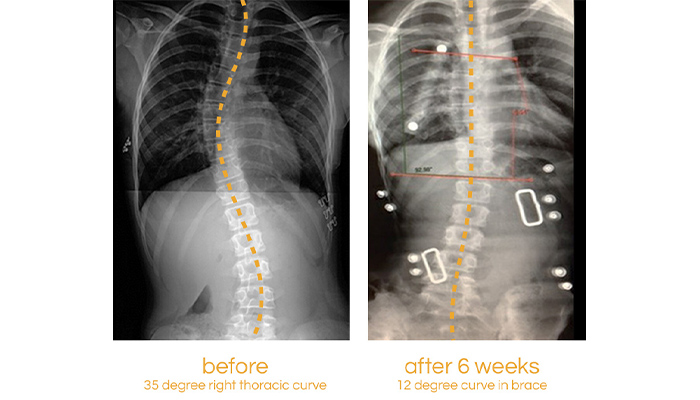 If your child has been diagnosed with scoliosis, you will naturally want to know whether the curve will get worse particularly if your child has not reached full maturity.

A number of scientific studies have established a risk factor or formula to estimate the risk of scoliosis progression for children with idiopathic scoliosis. In general, the more growing a child with scoliosis has to do; the greater the chance is that their scoliosis will get worse. As a young child’s skeleton is immature and can undergo rapid periods of growth during puberty, their scoliosis can rapidly progress during these growth spurts.

For instance, a 2017 study found that at the beginning of puberty, children with curves greater than 30 degrees had a 100% risk of progression to what is within surgical range (>45 degrees); while children with curves 21 – 30 degrees still had a 72.5% risk of progressing to that stage. (source: Charles, Yann Philippe; Daures, Jean-Pierre; Rosa, Vincenzo de; Diméglio, Alain (2006): Progression risk of idiopathic juvenile scoliosis during pubertal growth

Based on the magnitude of a curve present in a child at a particular stage of skeletal development, we can predict their likelihood of progression. Because every child is different, age does not directly correspond to a given stage of puberty, so one needs to factor in a combination of bone/skeletal age (determined by Risser sign), age, and the Cobb angle of the curve.

LOC can calculate the risk for you if you provide the following information:-

Please send the information to: [email protected], with the subject line: Scoliosis risk of progression calculation

One of our scoliosis clinicians will respond promptly and if it looks like your child does have a significant risk of curve progression, treatment options can be discussed in an initial free virtual assessment

LOC’s Scoliosis Team at SOSORT annual conference in May

Michael has achieved great results for his Pectus Excavatum with our vacuum bell treatment in combination with a specific exercise programme.