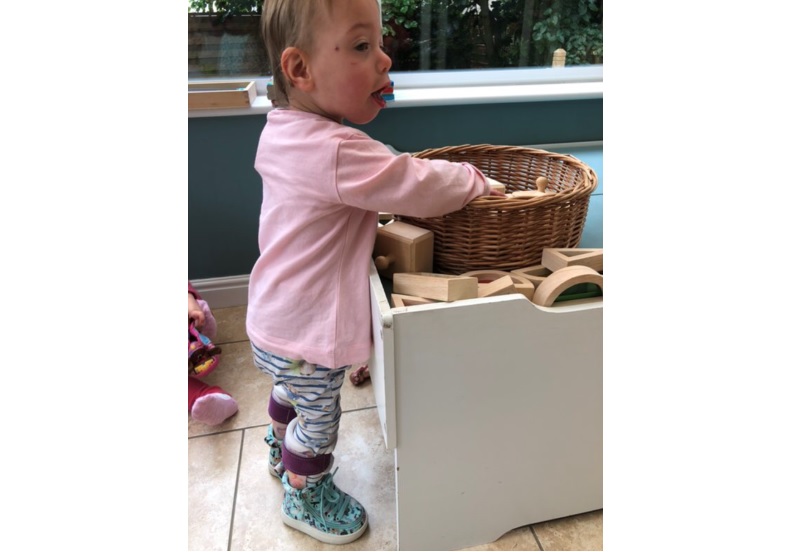 Born at just 31 weeks, having been diagnosed with Twin to Twin Transfusion Syndrome in the womb, little Scarlett is fondly referred to by her mum, Amy, as the family’s “little miracle”. “My pregnancy with Scarlett and her twin sister was a really difficult time,” Amy recalls. “Scarlett was treated as being in palliative care in the womb, and we were advised that she might be born in a vegetative state.”

Happily, Scarlett defied the odds and is now 22 months old, but the gestational condition has resulted in ongoing complications. TTTS is a condition that occurs when twins or other multiple siblings share the same placenta – what is known as a monochronic pregnancy. This can cause an imbalance in the exchange of blood supply between twins, which can cause a number of complications due to a lack of oxygen and nourishment reaching the ‘donor twin’.

In little Scarlett’s case, the condition has resulted in periventricular leukomalacia – or PVL. PVL is a type of brain injury that occurs when the white matter surrounding the ventricles of the brain is deprived of blood and oxygen. This affects the body’s ability to transmit messages from the nerve cells in the brain, in turn affecting the body’s ability to control its movements. For Scarlett, this manifests as a significant weakness on the left-hand side of her body, meaning that she is unable to stand without lower limb orthotic support.

“Scarlett originally had a set of splints from the NHS, but she quickly outgrew them,” Amy says. “Unfortunately, the second set we received were not accurately fitted and simply didn’t give her the support she needed. We noticed that she was actually getting weaker on her feet. She receives Conductive Education (a learning method that helps neurologically impaired patients learn to consciously perform actions that children would typically learn naturally). Her Conductive Educator recommended that we take her to see John (John Turner, Orthotist at LOC’s Manchester Clinic), to see if he could find a better solution.”

John’s priority for Scarlett was to focus on providing a set of custom-made Ankle Foot Orthotics (AFOs) for maximum stability below the knee. “It was important to make Scarlett a set of splints with the correct angle that addresses the tightness in her Achilles tendon,” he explains. “I also focused on bringing the AFOs around the foot so that they hold the foot at the right angle, to improve and strengthen Scarlett’s posture.” 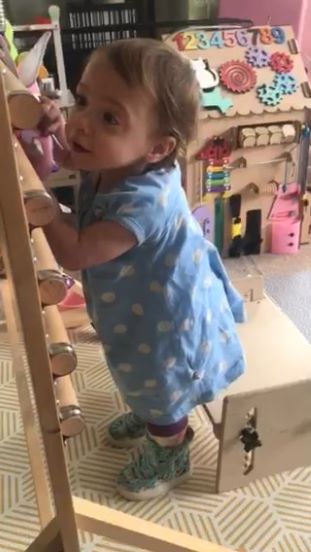 The effect when Scarlett first tried her new AFOs, Amy says, was instantly encouraging. “John has made an amazing pair of splints for her, and she loves being in them. We have noticed such a difference! She is now able to stand independently for a couple of seconds – whereas before she had to grasp things to hold herself up. She is starting to play whilst standing and to stand up in her cot so that she can chat with her twin sister. Both her private and NHS physiotherapists have been amazed at how much more confident she is in her new orthotics.”

As well as designing the AFOs – which LOC cast and manufacture in-house, John also paid attention to Scarlett’s footwear to maximise her splints’ impact. “Scarlett has a pair of Billy Shoes, which have a zipper that allows the ‘Vamp’ of the shoe (the part of the shoe that covers the upper foot) to open fully. That’s a really big help to an orthotist, as it allows the shoe to open and close around the AFO. I added wedging to Scarlett’s shoes to ensure that the foot is consistently held at the optimum angle, giving her more support and balance. When you are manufacturing a lower limb orthotic, it’s really important to think holistically about how the shoe and the splint coordinate together, to ensure that the orthotic really meets the needs of that individual child.”

Amy says that she is impressed by the thorough and careful approach John took to Scarlett’s treatment. “He was so knowledgeable; he gave us all the time we needed. He studied everything carefully and came up with a really detailed plan. He took photographs so that he could show me a before and after view of the impact on her balance. He gives you so much time, he never makes you feel like he’s in a rush. The aftercare is fantastic, as well. I always feel welcome to contact John with a question, or just to let him know how Scarlett is doing, and he always gets back to me. Plus, it was fantastic that we could have the AFOs cast there and then. All we had to do was to come back once to have the splints fitted. It made life so much easier.”

Above: Thanks to her new AFOs, Scarlett is standing for longer periods and playing with confidence whilst standing.

Now, Scarlett is really enjoying her new-found balance, and she finds them much more comfortable as well, says Amy. “Because they have the right level of padding and they are so well fitted, they don’t rub, so she is happy to put them on and wear them. It has already made a real difference to our family life. Recently, we took the girls to the zoo. It’s not something we have done before because it would have been too complicated, but with Scarlett’s new AFOs we felt more confident. We are optimistic that this early progress will eventually lead to her starting to walk as she gets stronger and steadier. I would recommend anyone in a similar situation to go and see LOC. John was very professional. He never tried to sell us anything, simply offered his expert opinion.  When you have a child with additional needs, it’s so important to keep up the therapy momentum – otherwise, things can start to go backwards. At the end of the day, it’s about ensuring that your child has the best possible quality of life. Scarlett’s AFOs will play an important part in that as she continues her journey towards standing and walking.”

If you have a child with a neurological impairment such as PVL or cerebral palsy, LOC may be able to help. For an initial consultation, simply contact LOC and we will arrange for you to visit one of our five orthotic clinic locations across the UK.