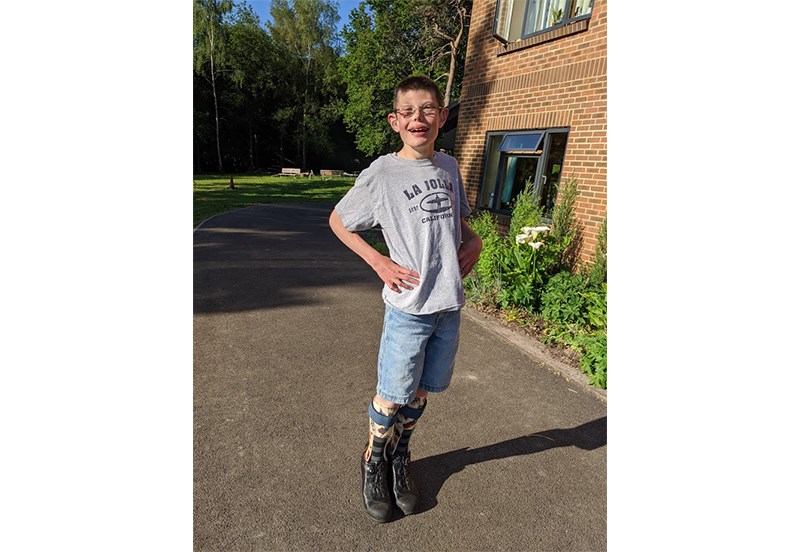 We first met Jason in November 2019 when he was referred to us by a Consultant Paediatrician at King’s College Hospital. Jason was, at this stage, not having a good time with his AFOs. The Consultant reported; “He has significant pain on walking and as a result…over the summer of 2019 he spent most of his time outside in his wheelchair, being limited to walking indoors only for the most part. His activity level had reduced drastically due to his pain.” The consultant also noted that he had 10 degree fixed flexion contractures at the knees

Jason was assessed by Anna Courtney, one of LOC’s senior clinicians who specialise in treating children with neurological conditions. Jason had a full biomechanical assessment in our video vector gait analysis laboratory. There was also a detailed physical assessment on the day. Combining both, Anna was able to accurately prescribe a set of bilateral solid ankle AFOs alongside a customised set of orthopaedic footwear.

In December, he was fitted with a pair of bespoke AFOs that were produced in our own manufacturing unit at our Kingston clinic. To go with them were some adapted Duna footwear. In April, following a review from his consultant, we received the following feedback:

“His parents tell me that they ended up paying privately for lower limb and ankle orthoses in London, predominantly due to the fact that he got to the stage where he was no longer able to walk independently. Since his new orthoses, his change has been remarkable. He is more mobile and can walk independently. Consequently, I am pleased to say that his x-ray shows the cobb angle for his lumbar scoliosis has improved.

Today, I measured the angle from L1 to L4 as 29 degrees. Last year, this was as much as 41 degrees. Given the fact that his angle has improved, I indicated to his parents that this is likely due to the fact that he is able to mobilise as a consequence of his orthosis.”

Anna regards the improvement of Jason’s scoliosis to be a huge bonus as the original objective had been simply to reduce Jason’s pain and make walking more bearable.

Jason’s parents report that he is now walking indoors and outdoors and is unrestricted. He is now properly enjoying the summer’s sunshine for the first time in a few years with no complaints of pain.

LOC has now supplied the family with a welly boot style of shoe to be worn in conjunction with his AFOs as he is enjoying being outside and gardening so much. Finally, because his knees are being fully stretched due to the new set-up, he no longer has contractures.