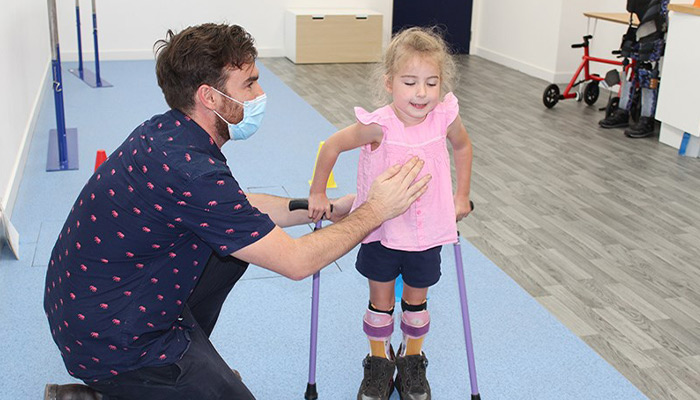 LOC has recently begun treating five-year-old Esme to help her regain strength and independence of movement following SDR surgery for cerebral palsy. Esme’s mum, Charlotte, is already seeing significant improvement in Esme’s mobility since her bespoke ankle foot orthotics (AFOs) were fitted. Here, Charlotte tells us about the challenges Esme has faced, the family’s experience of seeking orthotic treatment during the Covid-19 lockdown, and the positive impact her orthotics are already having.

Esme was born five weeks premature and spent the first 11 days of her life in specialised hospital care. “When we took Esme home, we thought everything was OK,” says Charlotte. “But, as the months went on, it became apparent that she wasn’t hitting the usual milestones. She struggled to sit up at the age that you would expect. When we stood her on her legs, they would always scissor so that she couldn’t bear her own weight. So, our local GP referred her to our hospital here in Swindon. It was just before Christmas, when Esme had turned one, that we received the diagnosis of spastic diplegia cerebral palsy. That’s when we realised that we were facing a different path in life for Esme.”

Naturally, Esme’s parents were keen to do everything possible to support her development. “Esme loves music and dance.  She would like to attend dance classes as her older sister has done in the past,” says Charlotte. “We knew that, without intervention, the spasticity in her legs would cause increasing pain, muscle shortening, bone deformities and eventually confine her to a wheelchair. So, we started to research what else might be out there in terms of treatment. We soon came across Lilacs Little Legs through social media (also a patient at LOC) and I connected with her mum, Leila. Like us, they were pursuing the avenue of selective dorsal rhizotomy (SDR) surgery. But, at that time, the surgery was not available on the NHS.” 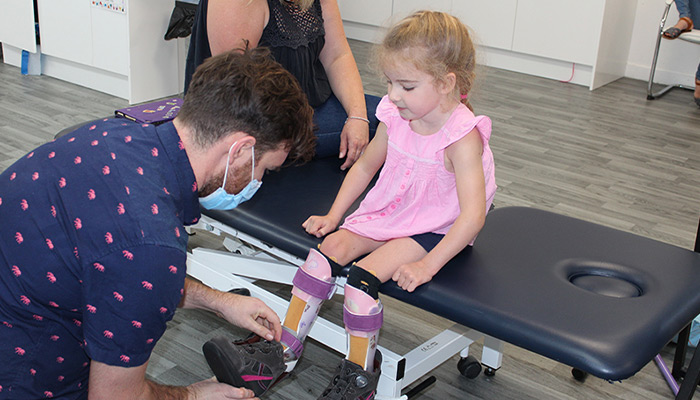 So, the family set about the daunting prospect of raising £50,000 to fund Esme’s operation, with the help of registered children’s charity Just4Children. “At first, we had no idea how we were going to do it,” Charlotte recalls. “But within six months, thanks to the incredible generosity of family, friends, our local community and even strangers, we had achieved our goal.”

What’s more, by the time the funds had been raised, the NHS announced as part of their 70th birthday celebrations, that the operation would be made available on the NHS pending assessment to meet their criteria, which Esme met. “It was amazing news because it meant that we could do so much more for Esme by using the funds raised to pay for her physiotherapy and additional treatment,” says Charlotte. “And it enabled us to investigate the orthotic support that we knew was helping Lilac and other children so much.”

Esme received her SDR surgery at Bristol Royal Hospital for Children in July 2019, just before turning four. “In fact, it was timed well, as it gave us the summer holidays to get used to the intensity of her initial physiotherapy following the operation,” Charlotte says. “At that time, she was wearing splints provided by the NHS. Their treatment was great, they always slotted us in as quickly as they could. But there is a limit to what they can provide, and Esme was finding the splints uncomfortable and difficult to wear. That was really highlighted during lockdown when she was at home with us all the time. We were concerned to ensure that Esme had the best possible ongoing treatment and support so that the benefits of her operation were not lost. So, we felt that this was the right time to start looking at something that was more tailored to her specific needs. We knew that Lilac was receiving post-SDR treatment from LOC which was making a huge difference, and so we decided to explore the possibilities.”

Fortunately, LOC has been able to continue treating patients in a safe environment throughout the Covid-19 crisis. “Our first appointment was on one of the hottest days of the summer,” says Charlotte, “so it was a little uncomfortable! But we felt completely safe. We wore our masks and sanitised and washed our hands and LOC did everything necessary to make sure that everyone involved was protected.”

Esme’s orthotist, Jarrod Cahir, first met her in LOC’s purpose-built gait laboratory. “When I assessed Esme, she had a good range of motion in her ankles, however, she had tightness in her hamstrings and hips,” he explains. “As a result, whilst walking with her sticks, she tended to go into a crouch gait position. We prescribed supportive AFOs with anterior shells and customised footwear to control her pronation and enable her to remain more stable and upright during stance - with the aim of encouraging an active stretch to her hamstrings and hip flexors.”

Thanks to LOC’s in-house manufacturing capabilities, Esme’s AFOs were ready for collection in under three weeks. She has only been wearing them for around a month, but Charlotte tells us that she can already see a significant impact. “Her posture looks much straighter. She is surer of her balance. She walks really beautifully in her AFOs when she puts her mind to it. Over the last couple of weeks, she has managed about ten unaided steps, and that has given her confidence in the orthotics and the support they offer. I was quite concerned about how she would react to the shoes because they're not the prettiest shoes in the world. But, as soon as she saw them, she thought they were amazing! She loves the splints as well because they're so much more comfortable. That's really important because it makes her more willing to persevere with the treatment.”

According to the charity, Cerebral Palsy UK, an estimated one in 400 babies in the UK are born with the condition. From Charlotte’s perspective, she is keen that other parents in her situation are encouraged by Esme’s story. “For us, it was definitely the right decision both to have the SDR surgery and to bring her to LOC. Charities like Just4Children are there to help and support parents who need to fundraise to meet the costs. As parents travelling this road with your child, you have to make so many big, tough decisions. You do have moments of doubt. But there are tools out there that can really help your child reach their full potential. From my point of view, if you can, why would you not do it? At this point, we don't have any regrets in the decisions we have had to make so far to give Esme every opportunity to live her life independently and without limits”

If you have a child with cerebral palsy, spina bifida, or any type of natal or acquired brain injury, orthotics can often help. Our paediatric orthotics page will help you find out more. Or, simply contact LOC directly and we will be able to help you decide on the right course of action for your child.