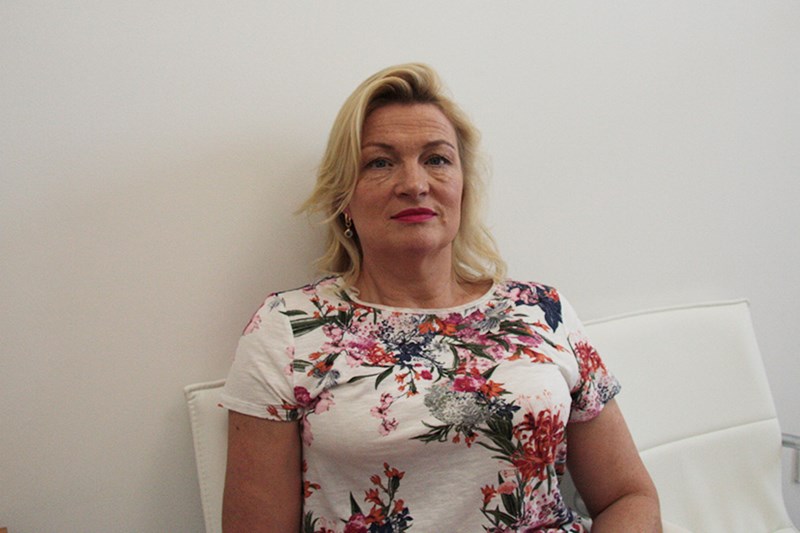 Busy pharmacist Sinead, 50, is on her feet eight hours a day and so, after several fruitless visits to consultants over the years, she was desperate to find someone who could treat her adult idiopathic scoliosis, or curvature of the spine  ̶  an often-painful condition that can be aggravated by ageing, which naturally causes the spinal discs and joints to degenerate.

Like many others, Sinead’s condition is a continuation of adolescent idiopathic scoliosis, when the spine begins to curve before or throughout the teenage years. “Actually, a friend of mine pointed out to me that one of my ribs was higher than the other during a gymnastics class when I was 15 and that’s how I discovered it,” she says. 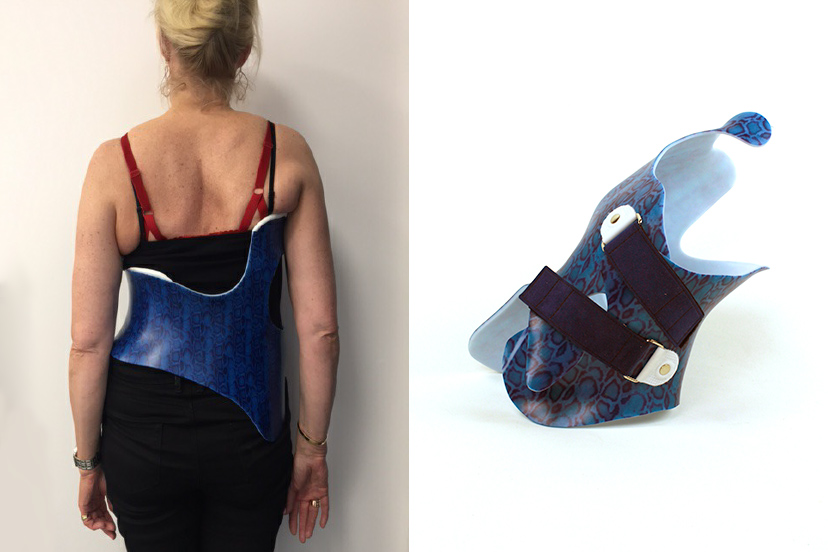 Above: Sinead in her blue snakeskin styled Cheneau-Gensingen brace

Sinead, from Ireland, was sent to Cappagh National Orthopaedic Hospital in Dublin, where her scoliosis was diagnosed. However, unlike children with more acute symptoms, such as those with juvenile idiopathic scoliosis, which requires corrective treatment to halt the progression of the condition, Sinead was informed that her case wasn’t severe enough to operate.

With no further treatment recommended, she left it at that, until her 20s, when, after experiencing regular bouts of back pain, she went to see her GP, who suggested painkillers and physiotherapy. At this point, the pain wasn’t too debilitating, and she was able to remain active, even climbing Mount Kilimanjaro. But, by her mid-30s, it was beginning to worsen and, in her 40s had intensified further, she believes, because of hormonal changes caused by the onset of menopause, a known aggravator of scoliosis in adults.

“At that stage, I was suffering severe pain and my walk had changed. I’d had various orthotics over the years because I had gone to the physio who’d said that I had a leg length difference. The pain became quite severe and I started to drag my left leg, so I went back to my GP and he referred me to a consultant in Dublin.”

However, Sinead didn’t feel they were taking her scoliosis seriously enough and she was becoming frustrated by the lack of action. Following an accident, in which she tore several ligaments in her left leg, her condition worsened. She made regular visits to a chiropractor but then, on the advice of a friend, contacted The London Orthotic Consultancy’s Schroth physiotherapist. (Schroth therapy is a form of treatment for scoliosis that involves exercises aimed at de-rotating, elongating and stabilising the spine in a three-dimensional plane.)

In the meantime, she visited another consultant, who offered a surgical option involving fusing some of the joints in her spine, but she was told that recovery would take six months and the results couldn’t be guaranteed for more than five years. Surgery, she decided, was not an option.

So, she made the trip to be assessed at The London Orthotic Consultancy. “[LOC] examined me and looked at my x-rays and she gave me an exercise routine, which I try to do at least four times a week, but I have to fit it in around my full-time job,” says Sinead.

She did find some improvement with the exercises but was looking for a more drastic solution, so, she says: “On my second visit, [LOC] said to me, ‘You know, we've developed this brace, would you consider it?’  And I said I would yes, absolutely.”

Sinead was measured and then introduced to one of LOC's clinicians, who fitted her with the Cheneau-Gensingen brace, designed to mirror her specific deformity, improving the appearance and halting progression. In contrast to the so-called ‘hard’ braces that attempt to treat scoliosis by essentially immobilising the patient, the Cheneau-Gensingen brace guides the body through a gentle corrective movement, realigning the spine and reducing distortions in posture. Sinead wears it all day, except for when she has a 20-minute rest in the afternoon. “The brace isn’t uncomfortable when you're not tired, but it can be when you are, so rest and recuperation are important. Getting a good night’s sleep is key to the treatment,” she insists.

As well as regular appointments to oversee her progress, Sinead continues to see a LOC physiotherapist for the curve-pattern-specific programme of physiotherapy that was developed especially for her and which complements the Cheneau-Gensingen brace treatment.

The results have been very successful  ̶  her spine rotation halved from 16֯ to 8֯ in the first three months since having the Cheneau-Gensingen brace fitted (see photographs). Says LOC: “Sinead looks fantastic! Her overall posture and appearance has improved greatly since wearing the brace. The results were fast and she reports her pain is reduced, which means so much to scoliosis in adults and to us as clinicians.”

Sinead is delighted with the treatment she’s receiving: “I'd highly recommend the LOC to anybody. They’re just so interested, which you don't get at many places because adult scoliosis is actually a huge area but there are very few people interested in it,” she says. 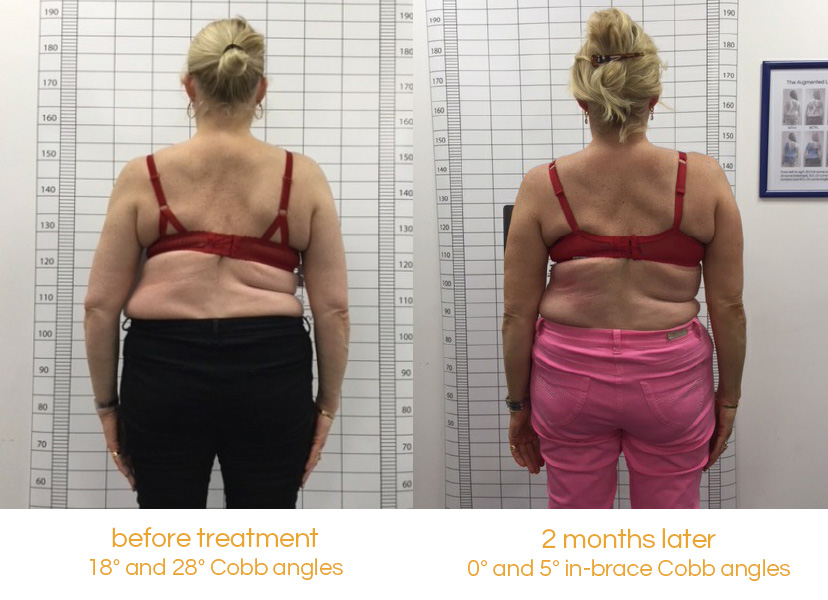 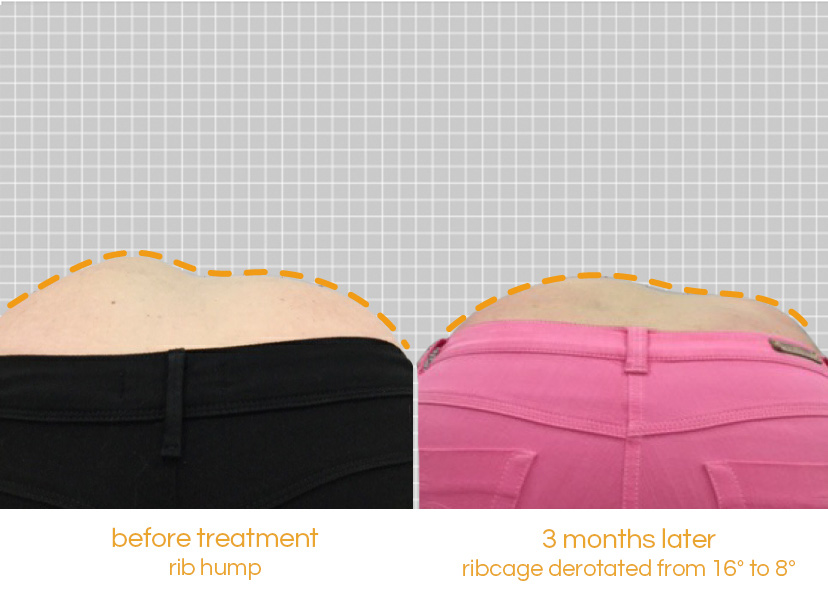 If you are seeking treatment to help alleviate the symptoms of adult idiopathic scoliosis, contact The London Orthotic Consultancy for an assessment with one of our clinicians. Once we have established which symptoms you would like us to concentrate on (for example, pain or appearance), an appropriate method of treatment, as well as possible outcomes for your individual case, will be discussed with you. For Sinead, the results have meant standing on her feet all day is now far more bearable. “I'm just sorry I didn't get here 20 years ago!” she says.

Share your story and find out more about The London Orthotic Consultancy by following the LOC Facebook page, or our new Scoliosis Clinic page on Facebook. 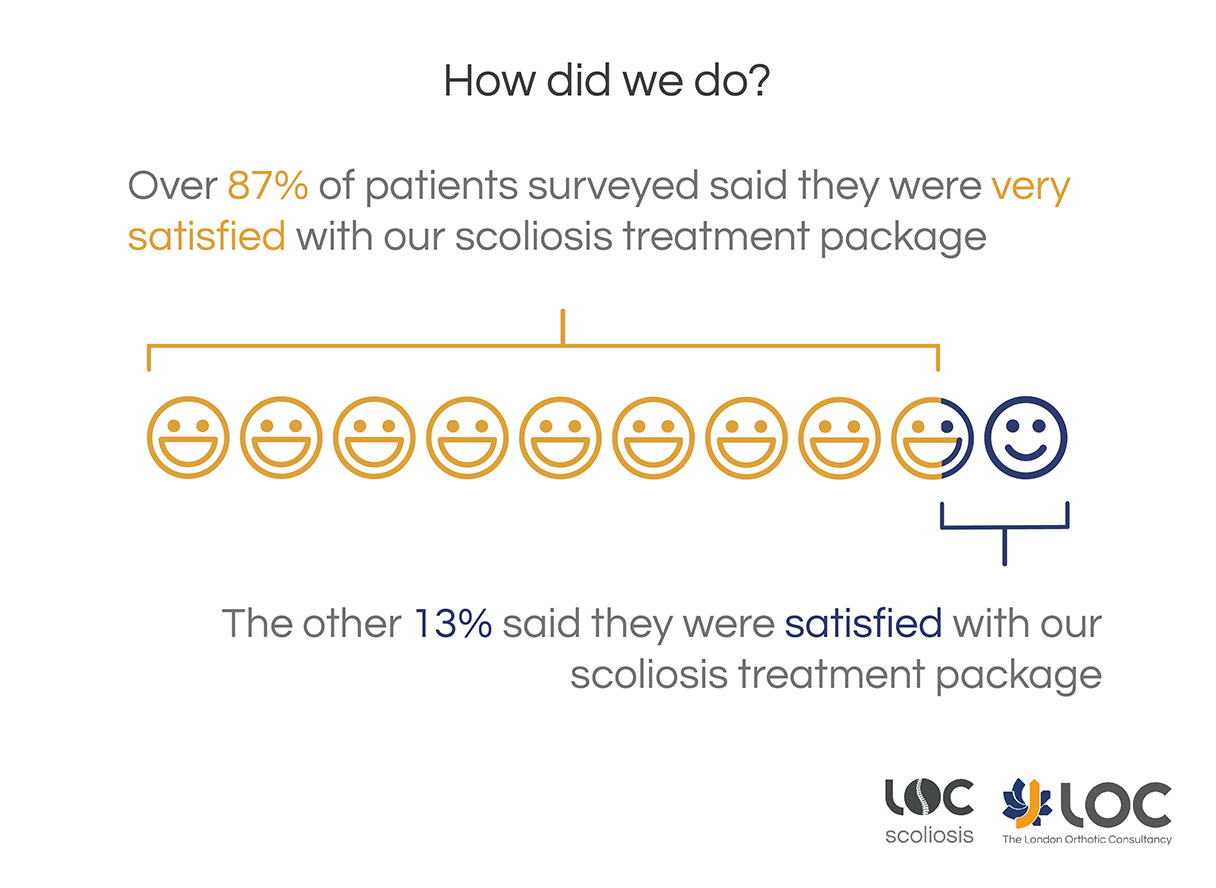