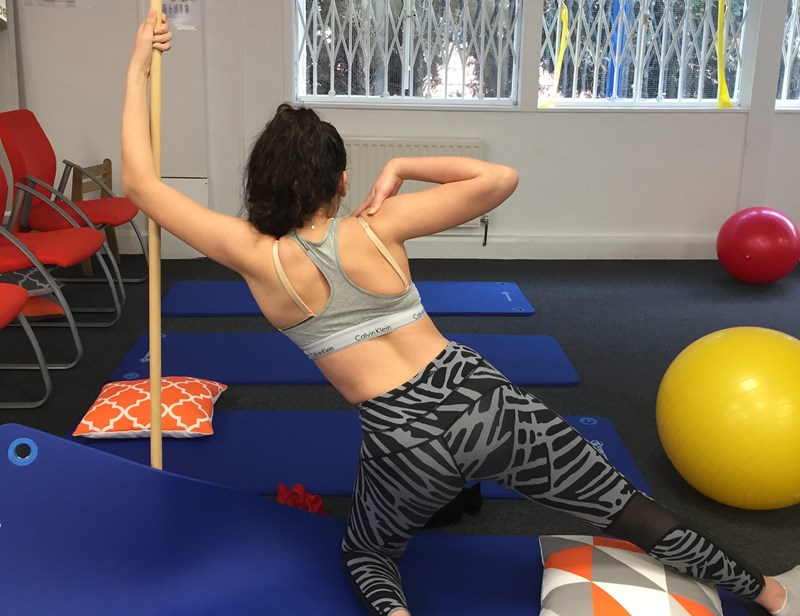 In January this year, 16-year-old Ariana came to LOC seeking treatment for her scoliosis. Scoliosis is the medical term that describes the abnormal twisting and curvature of the spine. It is particularly common in children aged 10-15 but can also affect people in adulthood.

Ariana was examined by a LOC physiotherapist, who checked her spinal rotation using a scoliometer device that measures how much a rib hump protrudes - known as ‘angle of trunk rotation’ (ATR). Ariana’s main rib hump ATR was 15 degrees. To put this into context, 6 degrees is regarded as normal.

“Ariana had a moderate Cobb angle – anything above 25 degrees is considered a moderate case,” Des explains. “We ruled out bracing, as Ariana was quite mature having very little growing left to do, therefore bracing was unlikely to make much difference to her Cobb angle at her stage of maturity.”  But Ariana was keen to explore the physiotherapy only route as an alternative. LOC prescribed a daily, one-hour programme consisting of four different exercises, which Ariana began immediately.

Two months later, Ariana returned to LOC for a check-up. It was clear that she had stuck to her programme and LOC was extremely impressed by the results of her hard work: “Ariana showed a great overall postural balance improvement,” she says, “and her rib hump had come down to an ATR of 11 degrees.”

When Ariana returned to LOC just a month later for her next consultation, the improvement was even greater, and Ariana had grown two centimetres in height. In just three short months her main rib hump ATR had reduced to 10 degrees, and her posture was re-balanced, purely through exercise. With an improvement in postural balance, scoliosis curves are less likely to progress in adulthood. 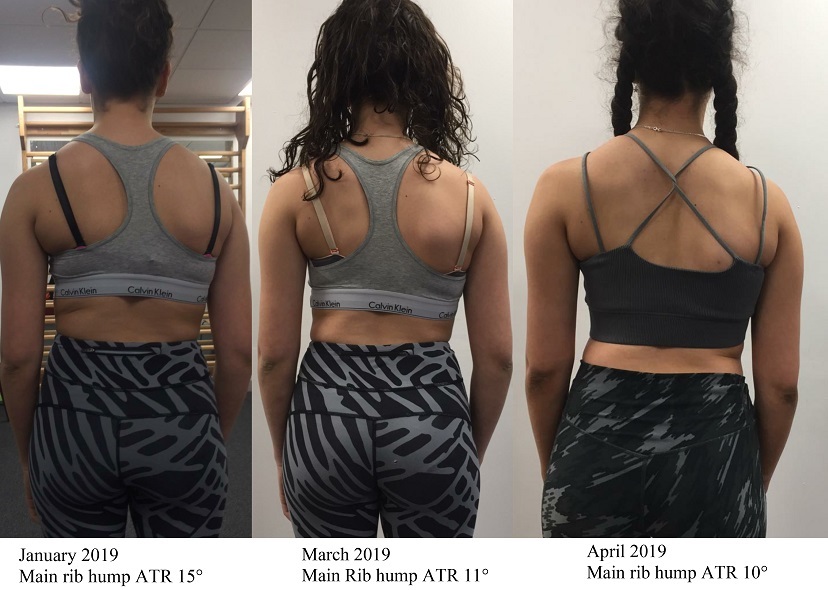 LOC was particularly impressed by Ariana’s dedication and self-discipline, saying: “She only needed three sessions to become self-managing and, now that she has improved her back, she just has to manage her posture.” With the right motivation, LOC believes others can achieve similar results. “I educate the patient; I enable them to manage their condition, rather than making them dependent upon me,” she explains.

Treatment through exercise alone, however, takes a lot of determination. In most cases, LOC recommends a combination of brace and therapy to achieve the best results in growing children with moderate Cobb angles. It’s a particularly effective strategy in younger children who are still growing – and, by combining the two, LOC aims to increase the length and strength of her patients’ muscles so that the out of brace posture remains stable after bracing finishes.

Exercises are still an extremely important part of the treatment, though. “The brace will improve a Cobb angle,” says LOC, “but patients that don’t do their exercises don’t see as much of an improvement in their appearance.”

For older patients, like Ariana, who have little or no growing left to do, and for whom a brace may not be suitable, following an exercise regime can usually make big improvements.  “If you know you have scoliosis but think you're probably too old to have an improvement on the Cobb angle, then you can still make a difference through exercises”.

Ariana is a prime example. She thought nothing could be done to correct her spine curvature but, once LOC told her what to do, she felt that she was really able to make a difference to her posture and appearance. Ariana is thrilled with the improvement she made through exercise in such a short period of time.

LOC encourages parents like Ariana’s who are concerned that their children may have scoliosis to contact LOC for an appointment with one of our clinicians. If you are unsure if you have scoliosis, LOC can also screen for the condition for free at her clinic which she runs every fortnight at our Kingston clinic.

Interestingly, the post-summer months are LOC’s busiest time for scoliosis referrals, says LOC. “We have a big influx of patients in September and October because everyone has returned from holiday and, of course, swimwear makes posture deformities more noticeable to parents. So, both young and adult patients may have become more aware of the problem and they tend to approach us at around this time, keen to explore treatment options. I can’t emphasize enough that whatever your age, or the severity of your scoliosis, there are a number of non-surgical treatment options available and we are able to help you find the right programme for your situation and condition.”

Whenever you decide to seek help, Ariana’s case proves that, with the right treatment and a lot of determination, scoliosis patients can achieve remarkable improvements to their posture and appearance.

Share your story and find out more about LOC by following the LOC Facebook page, or our new Scoliosis Clinic page on Facebook. Alternatively, if you would like to talk to us about our scoliosis treatment packages, get in touch.