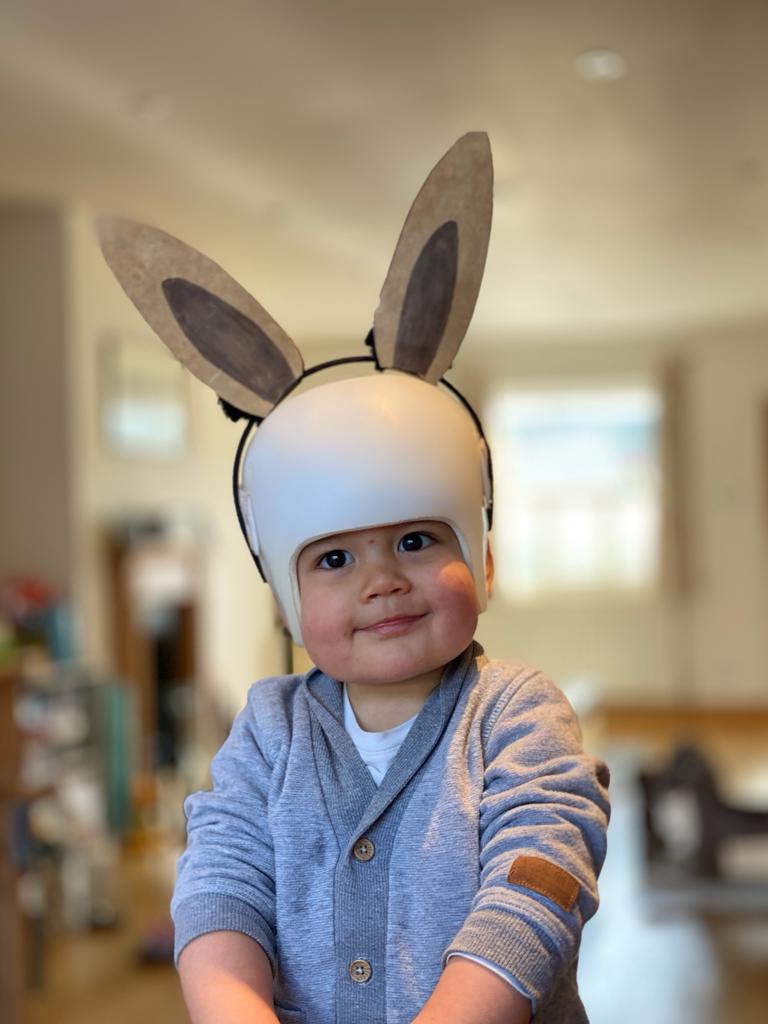 Tiernan attended LOC in October 2019, one week following surgery at Great Ormond Street Hospital (GOSH). The prominence of his occipital bone was noticed by his parents in the first few months following birth and after a few medical reviews, they were seen in GOSH. Rachel, his mother, explains “I have a clinical science background, so I did a lot of reading, talked to friends who were in the medical world to fully inform myself about the right treatment approach and we ended up at GOSH and agreed for them to perform an endoscopic strip craniectomy, this is very commonly done in the States and Australia but isn’t yet common practice over here. It is as minimally invasive as much as these procedures can be. However, they said we don’t do the helmeting.”

Following surgery, cranial remoulding with a specially designed helmet is required to gently bring about a more symmetrical head shape so Rachel needed to find somebody to do the helmeting. ”I did a bit of a Google search, came up with LOC, contacted Jo (Drake – one of LOC’s cranial specialists) and felt quite confident after speaking with her. Also, when we went to see GOSH, they gave us a list of companies and obviously LOC was on that list.”

At his first assessment with Jo, Tiernan presented with a typical sagittal synostosis head shape, with a prominent occipital bone, bilateral frontal bossing, and parietal flattening.  At the appointment, a scan was taken so that his first Cranioband could be manufactured, as well as measurements and photos to monitor progress.  At this stage, his cranial index was measuring 66%. (The normal range for this cephalic index is 78-89%)

Six days later, the family attended for his fitting, informing Jo with great excitement that Tiernan had rolled from his back to his tummy for the first time a couple of days after his scan, however they had been waiting for him to repeat this since.  His scar was looking well-healed, and the fitting went well.

At the 1st review after 1 week’s wear, Tiernan was doing well and had taken to wearing the band full time. Managing the wearing of a helmet is often a concern for parents and it was for Rachel, “I was thinking about helmet management which I thought was going to be quite stressful. And surprisingly it’s not. It’s pretty much like changing nappies, you just get used to it”. Initially, Tiernan was a bit unsettled at night, but after 4 days of gradually building up wear, he was able to wear it both days and nights.  He had grown as expected and his parents felt that his head shape had improved and was looking a little wider. Measurements confirmed this as his cephalic index had increased to 67%.  Although only a small change, this was indicating that his head was growing in the correct way. 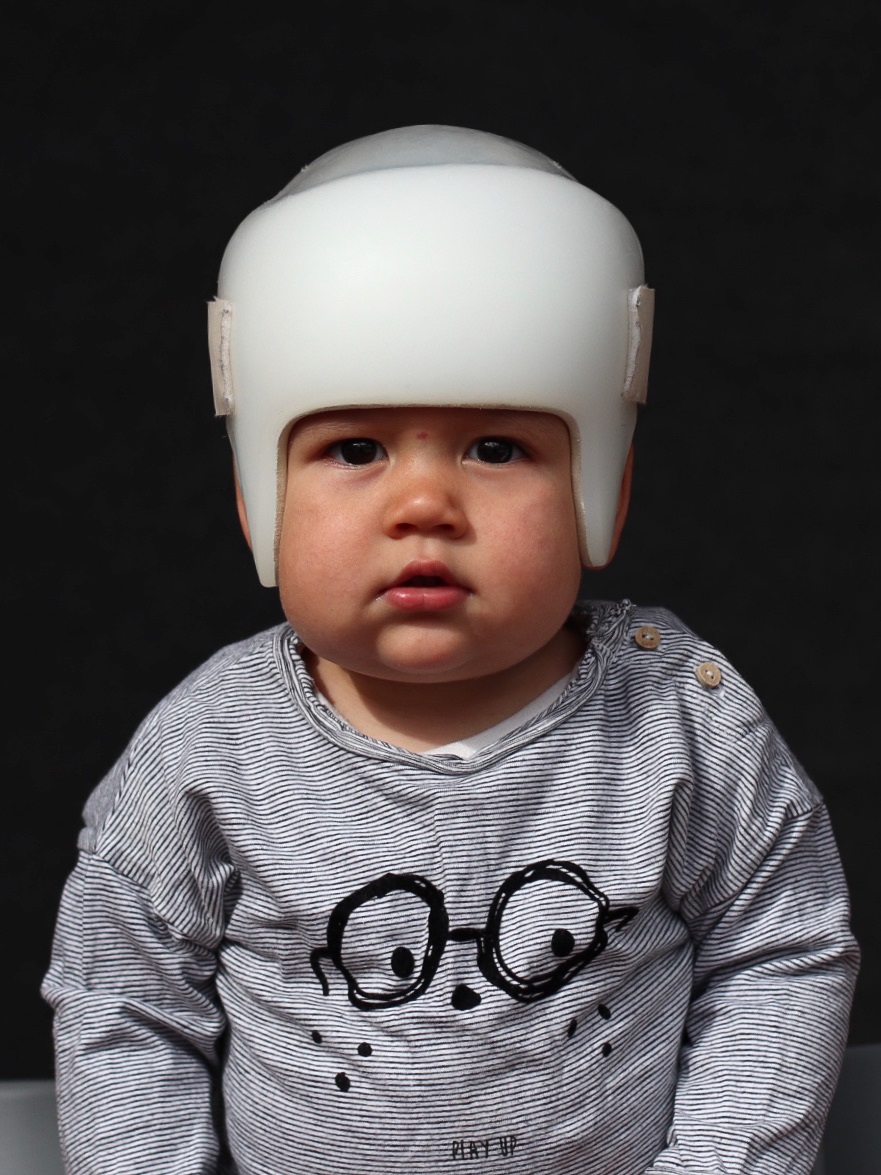 Over the next 2 months, Tiernan continued to wear the Cranioband very successfully. During this time his head shape had improved with his cephalic index reaching 70%. Tiernan was due his review appointment at GOSH and the fit of the band was getting tight so a scan for a new band was taken and a comparison scan report was produced for his parents to take to their appointment at GOSH.

At this stage, we also proceeded with a second Cranioband as Tiernan had started to outgrow his first one.  In Tiernan’s case, we decided to continue with the Cranioband as this offers full enclosure of the top of his head which is preferable for sagittal synostosis cases. Tiernan wore his 2nd Cranioband for 8 months before his next appointment with GOSH, and another scan report was produced. 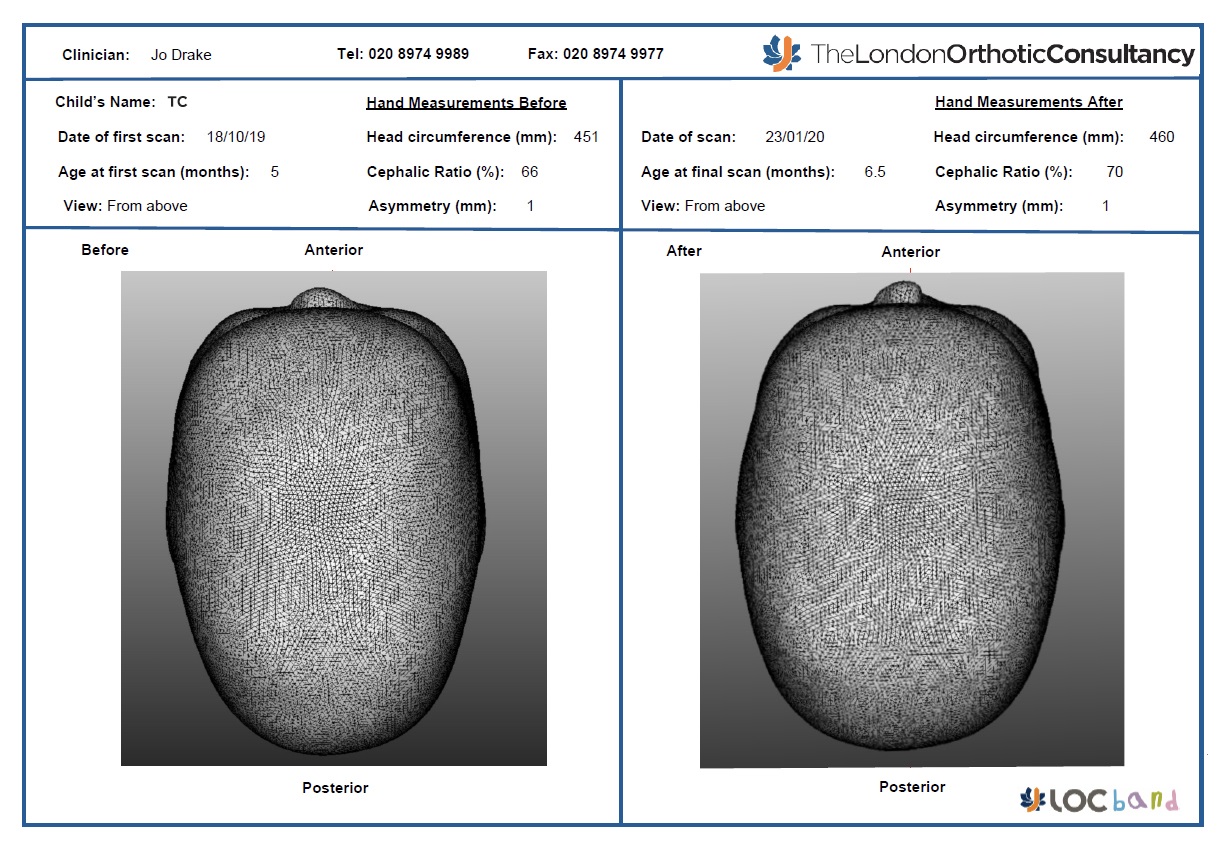 Tiernan’s cephalic index had continued to improve to 73%. He had developed into a delightful boy who had gone through learning to crawl, stand and now walk.  GOSH recommended that he continue in treatment until he was 2 years of age due to concern about regression in sagittal cases.

Within a month he was outgrowing this Cranioband and so another one was manufactured to continue guiding his head growth.  Treatment was continued for a further 5 months until he was 2 years of age.  His cephalic index continued to improve to 74%. Visually the changes were great, and his head shape was looking good by this stage.

At the end of treatment, although she was really happy about the outcome of treatment Rachel had quite mixed emotions, ”When the helmet was taken off for the last time, I actually felt quite mixed emotionally about that, because it felt like you’re accepting that you have done everything that you can do, basically. Now we look at Tiernan and think you just wouldn’t know that he had surgery and the follow-up treatment. For any parents in a similar situation, I would recommend LOC, they are professional but also personal. We had a really good experience. I don’t think there’s anything that we felt could have been done differently.”

If you think your baby has Craniosynostosis please seek an initial consultation with GOSH and if you decide to proceed with surgery, then contact us. Our treatment plan begins with an appointment prior to the date of surgery at Great Ormond Street Hospital. Find out more about our post-operative treatment. 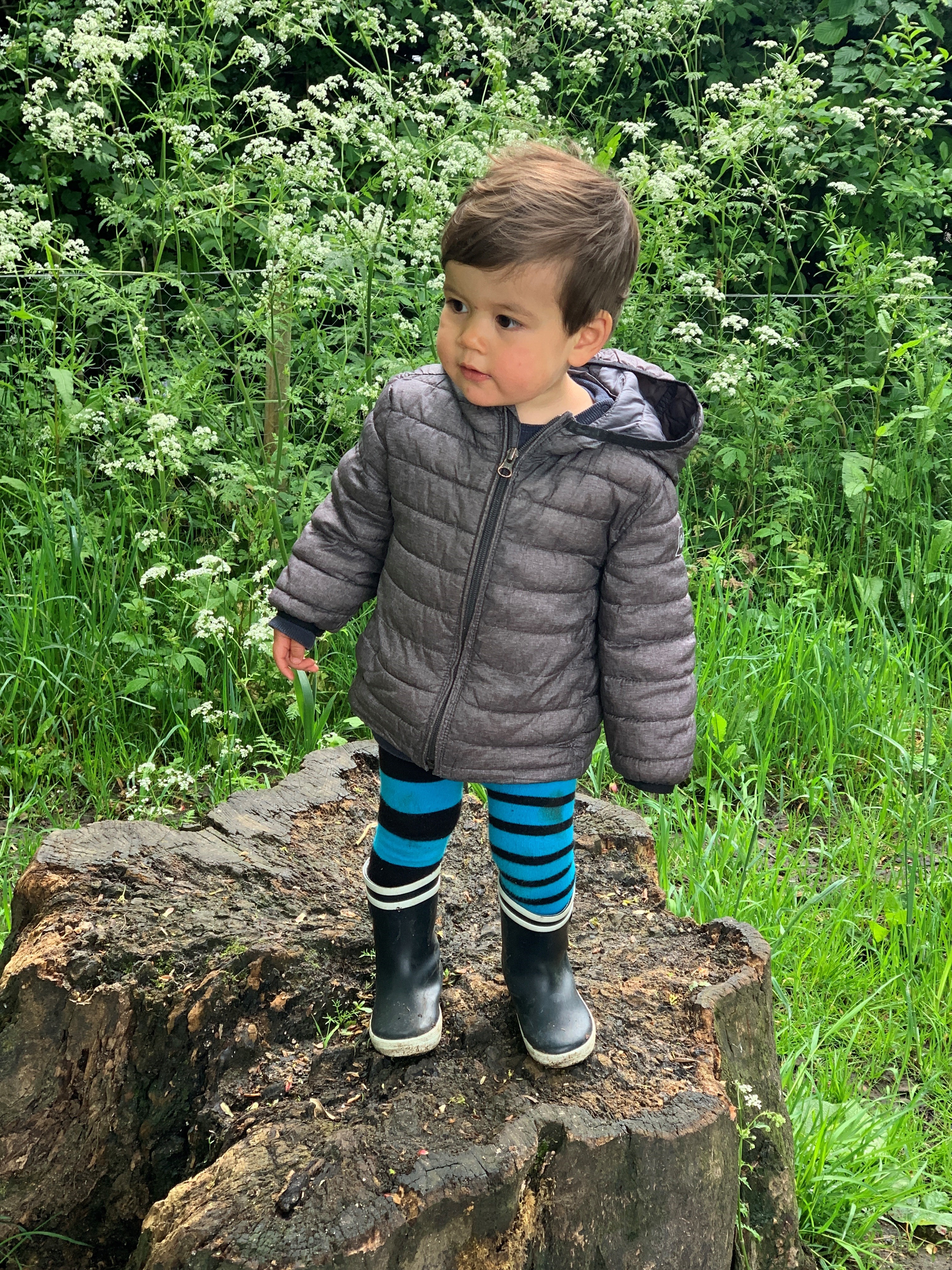