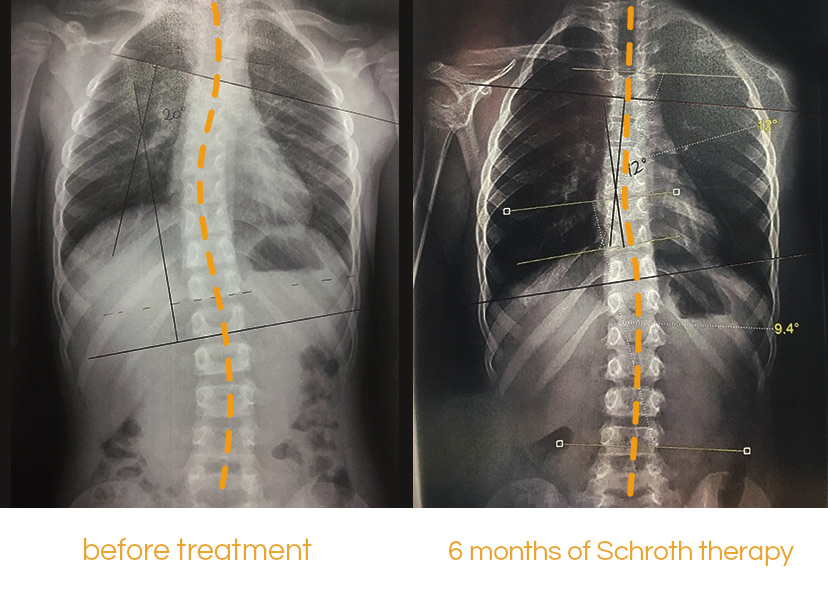 For parents of young children who have recently been diagnosed with scoliosis – the abnormal, sideways curvature of the spine – it can be a daunting prospect knowing that their condition will not improve without treatment. For children diagnosed with juvenile idiopathic scoliosis, which typically affects children between the age of four and ten years, the likelihood is that the condition will worsen over time. With such a high risk of progression, seeking treatment early can pay dividends.

One of the common misconceptions about scoliosis is that the only solution to correcting a curve is via surgery. In just nine months, one seven-year-old patient has proven it simply isn’t the case.

Strictly following her nine-month Schroth physiotherapy home exercise programme – and finding time to fit in her Capoeira and swimming classes three nights a week too – has been a challenge, but one that she has taken in her stride.

Her parents were alarmed at first: “We spent the whole night looking online for scoliosis treatment in the UK when she was first diagnosed,” says her mother. To get some more information from others going through the same experience, her father who “had never been on Facebook before” signed up because of his daughter’s scoliosis in order to find out more.

After their search on Facebook and elsewhere online, they came across the London Orthotic Consultancy’s clinic in Kingston, not far from their home, and quickly decided to book an appointment. Her mother says in just nine months, she has shown clear visible improvements.

Her improvements were even noticed by her grandmother, says mum, “When my mother visited in May for her first communion, the last time she’d seen her before that was in December and she had noticed her better posture. Even since then her posture has improved… her rib hump was quite visible then, but now if she bends over, it’s much better – it’s almost disappeared”.

Her successful results and achievements are a direct result of her commitment to the home exercises, says resident Schroth physiotherapist Deborah Turnbull, after religiously doing exercises four days a week after school typically, “it takes an hour and forty minutes each night” says mum, “the exercises take up time and we use props” but for the brave seven-year-old, this also means an opportunity to watch Britain’s Got Talent on the iPad.

Evidence suggests that scoliosis is linked to genetics, is more common in girls and can run in families. Unsurprisingly, her mother also has scoliosis and had spinal fusion surgery four years ago, she says her negative experience with spinal surgery motivated her to get her daughter into treatment early; “the idea was to get her in so that she could avoid surgery”. Before taking her daughter for an X-Ray last year September, she recalls noticing “that her rib was pushed forward, it’s only because I have scoliosis and was operated on four years ago that I realised because I already had knowledge about it.” This is handy, being a parent, she says “even if someone is showing very small signs of scoliosis I would spot it.”

Early non-surgical orthotic and Schroth-based physiotherapy exercises are recommended if you want to avoid surgery altogether. The risk of complication with spinal surgery can be daunting, and recovery can take up to 3 to 12 months to return to normal daily activities. Her mum shares her negative experience of surgery, “it’s been more than four years and I still feel a lot of pain everywhere; my neck, shoulder blades, lower back - it’s not good.”

She adds, “I can drive, but not for long, I do pilates, sometimes it absolutely kills me with the pain though. I swim too, and I try to do everything I can but it’s not easy, all the time in pain. My curve was quite large.”

After both mother and daughter’s experience, mum stresses the importance of learning more about the condition, after feeling she lacked the knowledge. She also recommends that parents talk to others about their condition apart from reading about it, stating: “If they already have the diagnosis, look online and try and find other people with the condition and meet people, talk to them. Read all you can about it, as many people don’t understand the condition. Then you can get it treated”.

Schroth Method physiotherapy is the programme our star patient underwent, without having to use the Gensingen Brace by Dr Weiss®, which is impressive as it’s supposed to work in conjunction with the physiotherapy programme.

The exercises can help improve curve to normality and have been proven to help reduce Cobb angles without bracing. Recently, the London Orthotic Consultancy opened a Schroth Best Practice physiotherapy clinic at The Portland Hospital in central London, providing patients with more choice as to when and where they can receive treatment.