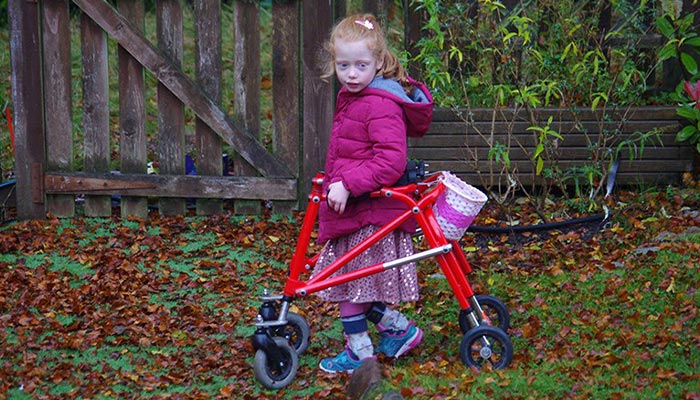 For six-year-old Sophie, life has always carried unique challenges. LOC orthotist, Alan Hews, has been working with Sophie and her family since she received selective dorsal rhizotomy (SDR) surgery for cerebral palsy at the Portland Hospital aged three.

A bespoke treatment programme initially applied LOC’s cutting-edge ankle foot orthoses (AFO) technology, before a later prescription of supra malleolar orthoses. This ongoing treatment has played a major role in building Sophie’s recovery, strength and endurance since her operation. When the Covid-19 pandemic caused lockdown in March 2020, the family’s access to local support collapsed, threatening Sophie’s progress and independence. Fortunately, Alan and the LOC manufacturing team were able to step in, revising Sophie’s orthotics to meet her changing needs in just 48 hours, all within a Covid-safe environment.

Together, Alan and Sophie’s father, Jonathon, explain the role that orthotics have played in Sophie’s journey towards independent movement, and how LOC’s in-house manufacturing capability saved the day despite the unprecedented challenges of lockdown.

Sophie was born at just 27 weeks. She spent two months in hospital care before coming home, still one month premature. “At that stage, we were hopeful that she’d be amongst the 10% of premature babies without complications,” says Jonathon. “But by Christmas, she started having seizures and spasms. At first, the hospital put it down to a high temperature, but we knew that something else was amiss. It was some time before she was formally diagnosed with cerebral palsy. We were referred to a physiotherapist who has been a great advocate for Sophie’s care. Just after Sophie turned one, we wanted to compliment her core NHS treatment so we started researching what other help might be out there.”

The family discovered the Bobath Centre – a specialist unit for children with cerebral palsy. The centre’s intervention, Jonathon explains, showed the family that there were a lot more options available to Sophie than they had previously realised. A major milestone came when Sophie, then aged three, was accepted for the SDR surgery. It was at this point that the family was introduced to LOC.

We work regularly with SDR patients, manufacturing custom made orthotics to assist their rehabilitation and Sophie’s paediatric neurologist, Dr Kristian Aquilina, referred her to Alan for assessment.

“One of the things we’re aware of with SDR surgery is that, after they turn the neurological taps off (which is effectively what the surgery does) it causes children who had previously relied on the tone in their legs to hold them up from a crouch,” Alan explains. “We wanted to make sure that wasn't going to be the case for Sophie. So, we cast a pair of AFOs for her to wear immediately post-op, to encourage her into a more extended position in her knees and in her hips. Subsequently, we moved her into some hinged splints, which allowed more freedom of movement around the ankle. Most recently, we have cast some new splints that are even shorter and hinged."

Alan adds: “Sophie’s parents are really on the ball – they use our splints as part of an overall package that flexes to her needs and environment. Sometimes she's barefoot, sometimes she's in a pair of turbo med splints, and these strategies complement the AFOs that we've provided. This has helped to keep her stable as she has grown, and she's now walking pretty well with her existing setup. It's all part of a bigger picture that we fit into, and we were able to facilitate a bespoke solution for Sophie that she couldn’t have accessed locally.”

Jonathon agrees that the orthotics supplied have had a huge impact over the past three years. “As soon as Sophie got them, it was clear that they were a world apart from anything we’d had before. You could see straight away how well fitted they were; they were a much better shape for Sophie’s foot. They were much more supportive, and they were comfortable. The way that LOC handled the fitting and delivery was very different, too. Previously, we found ourselves having to wait for months just to get a standard pair of prescription AFOs."

Instead, Alan visited Sophie just a few days after her surgery, casting her and returning to do the fitting all while she was still in the hospital. “With each set of orthotics that she has received from LOC, she has been able to stand and walk in them straight away,” says Jonathon. “It has been a breath of fresh air – LOC’s ability to accommodate Sophie’s circumstances and manufacture her orthotics so quickly has taken a huge amount of potential stress away.”

Fast forward to summer 2020 and Sophie and her family faced a different challenge, due to the extreme circumstances caused by the coronavirus pandemic. “Jonathon called me to say that Sophie was coming to the limit of her current orthotics because, of course, she is growing all the time,” says Alan.

“The family had originally planned to come to us for a review in March, but then lockdown happened. Jonathon was unable to access any kind of orthotic treatment locally. We had been able to keep our Kingston clinic open with Covid-specific safety measures in place. So, the family arranged safe, isolated accommodation and drove down to see us. Thanks to our in-house manufacturing team we were able to cast Sophie, manufacture her hinged supra-malleolar orthoses and fit them – all within 48 hours. It’s really important that patients like Sophie don’t encounter any interruption to their treatment, so we’re all delighted that we’ve been able to ensure this continuity at such an unusual time.”

Jonathon agrees: “Usually, Sophie does different therapeutic activities every day like swimming and horse riding. During the lockdown, those activities were suspended, so we focused on walking instead. By the end of lockdown, she was able to regularly walk a mile thanks to her SMO’s combined with her other interventions.”

As a consequence, Sophie’s endurance has improved in leaps and bounds, says her father, who would advise any parent in the same situation to come and talk to LOC. “Their approach is really flexible,” he says. “They engage in a continuous conversation with you – they recognise that, as parents, we know our children better than anyone. Alan talks to Sophie as well - she looks forward to seeing him. He has even been able to fulfil her request to have her SMOs decorated with unicorns! It makes her feel special and much happier about wearing them.”