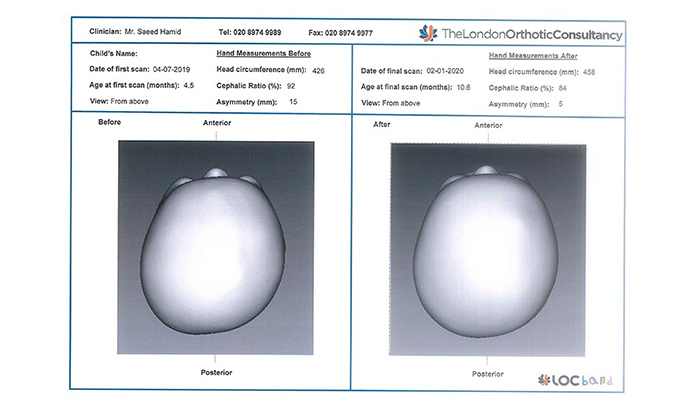 It wasn’t long after Robert was born that his mother, Rosie, realised that something was wrong. Robert had a difficult delivery, born back to back, coming through the birth canal facing upwards, with his head against Rosie’s spine. This makes labour very painful and harder to push, meaning the baby is more likely to get stuck since their head is not at the correct angle to navigate the birth canal. As a result, there was a considerable strain on Robert’s neck so that he could only look forward or to the right. But that wasn’t all. “I noticed quite quickly that his head was becoming misshapen,” says Rosie, who alerted her health visitor and doctor (Robert was also being treated for a heart murmur). “They dismissed my concerns and told me to lay him on his other side, but he wasn’t comfortable like that and couldn’t move properly.”

Rosie persisted and, eventually, Robert was given physiotherapy. However, his head wasn’t changing shape. She became more and more concerned; at a loss as to what to do next. Then, a chance encounter with a stranger gave her the answer. While visiting a garden centre one day, she passed a woman with twin babies wearing helmets. “I stopped and said: ‘I don’t want to sound rude, but can you explain to me why they’re wearing them?’” Rosie recalls. “She explained that the helmets were there to treat her babies’ flat head syndrome (or plagiocephaly) and I said: ‘That is the exact same concern that I have for my little one!’”

The woman gave Rosie the contact details for LOC and she immediately got in touch with our Bristol clinic, making an appointment to see Saeed Hamid, Orthotist and Director of LOC. “He assured me that I wasn’t being stupid,” says Rosie. In fact, Robert was diagnosed with plagiocephaly, a condition that affects the skull, making the back or side of a baby’s head appear flattened.

In Robert’s case, this was caused by the pressure exerted on the soft plates of his skull during his complicated birth. Robert had a particular asymmetrical head shape called brachycephaly, where the back of his head had become flattened. His cephalic ratio - the measurement that categorises an infant’s head shape - was 92% (anything above 90% is recommended for treatment) and he had a cranial vault asymmetry of 15mm (normal is 0-6mm), making his case a severe one.

Saeed recommended cranial remoulding therapy and measured Robert for a LOCband, a helmet designed and perfected by our own clinicians that normalises head shape. The optimal age for beginning treatment is between four and seven months because the skull is still soft and the cranial plates haven’t fused yet. Robert was five months old when he began wearing the LOCband, so the prognosis was good. And he adapted to his new helmet extremely well. “Robert got used to it,” says Rosie, “to the point where, when it was off, he’d touch his head all the time, as if to say: ‘Where’s my helmet?’”

Initially, Saeed saw Robert every two weeks to monitor his progress, which, it turns out, was pretty rapid. Within the first month, his cranial asymmetry dropped from 15mm to just 7mm. “The improvement was noticeable,” says Rosie, who was so relieved to finally find someone who could help her little boy. “Saeed was so understanding,” she says. “He talked me through everything. Even if I felt like a question was stupid, he would answer it, and that made me feel like I was in the right place.” LOC was even able to help Rosie gain financial assistance towards the cost of Robert’s treatment through a charity.

Over the next four months, Robert’s head continued to grow but the shape stayed the same. “It was just a waiting game, really, to see if there would be any more improvement,” she says. However, in the last month, before he grew out of the helmet, Robert’s head shape did change. After just six months of treatment, Robert had a cranial ratio of 84% and his plagiocephaly asymmetry was down to 5mm.

Now 11 months old, Robert has completed his treatment and Rosie couldn’t be happier with the results. Asked what advice she’d give other parents in a similar situation, she says: “Go with your gut instinct. If you feel it doesn’t look right, then it’s not, because you know your child better than anybody. I knew that something that was out of shape was not going to correct itself just by turning him on his side. Saeed and the rest of the LOC team took me seriously and Robert now has a normal head shape.”

If you are worried about your baby’s head shape, you can use our online flat head diagnosis form for a fast, free and confidential clinical opinion from one of our orthotists. Your first appointment, should you need one, is also free. Contact LOC for more information or to make an appointment.