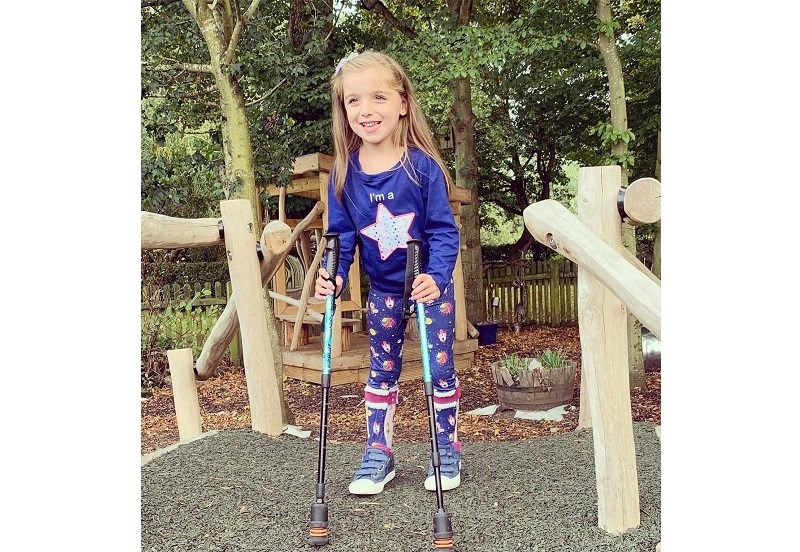 Five-year-old Lilac from Cheltenham may look as pretty and delicate as her name, but underneath that smiley exterior, she has a fighting spirit that belies her young age. Born six weeks premature, Lilac contracted sepsis and her organs began to shut down. She was immediately put on life support and, as mum Leila recalls: “We were told if she was still with us in half an hour, it would be an absolute miracle.” Lilac defied those slim odds and has been doing so ever since.

And here's a great example of Lilac's fighting spirit: watch her try on her custom made ankle foot orthotics and thoroughly explore our Kingston-upon-Thames clinic. Make sure you catch the end to find out what she thinks of her new AFOs.

Incredibly, Lilac seemed to make a full recovery and was eventually discharged from hospital, returning home with Leila, her husband, Barry and Lilac’s older sister, Lulu. However, as Lilac approached six months, her parents noticed that she was falling behind with her gross motor milestones. So, Lilac was referred to the neurology department at Evelina Children’s Hospital in London around her first birthday. An MRI scan dealt the family another challenging blow: Lilac was diagnosed with quadriplegic cerebral palsy caused by brain damage at birth, meaning she would never walk or talk and that she’d be confined to a wheelchair for the rest of her life.

Despite their initial shock, Leila and Barry refused to accept that nothing could be done for Lilac; after all, adult stroke patients receive rehabilitation to rewire their brains, why couldn’t the same be done for their baby daughter? So, after extensive research, Lilac began physiotherapy and occupational therapy, as well as some alternative therapies. Slowly but surely, she made progress and even had her cerebral palsy ‘downgraded’ to spastic diplegia, which meant that the impairment was mainly in her leg

Around her second birthday, Lilac was even able to take her first steps with the aid of a posture control Kaye walker. Encouraged by her progress, the family decided to look into surgery and found an operation called selective dorsal rhizotomy, or SDR, which eases muscle spasticity and improves mobility in people with cerebral palsy by cutting the nerves in the lower spine that are responsible for muscle rigidity.

At the time, SDR was not available on the NHS (today a small number of patients meet the criteria for the treatment), so Lilac’s family decided to raise the £30,000 she needed for the surgery and the post-operative care she would require. They began a JustGiving page with support from the charity Just4Children and were bowled over by the response. Thanks to the kindness of family, friends and strangers, when Lilac was three-and-a-half, she underwent the SDR operation at the Bristol Royal Hospital for Children. 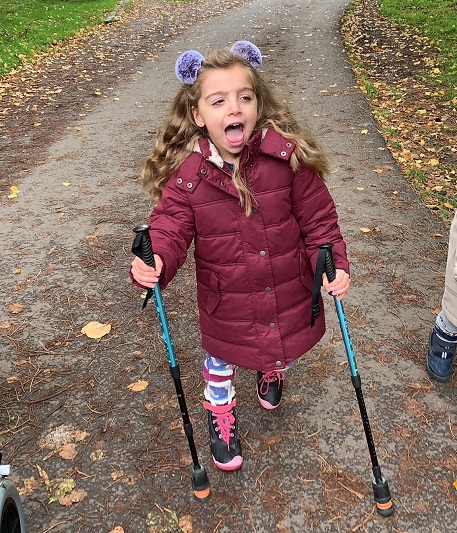 It was a complete success, leaving Lilac with no residual spasticity. “The operation was every bit as life-changing as we ever dared to dream and then some,” says Leila. Just three months after the operation, Lilac took her first independent steps.

However, SDR demands an intensive rehabilitation programme, which Lilac will need to continue in the long term.  All was going well until Lilac’s progress began to plateau. “We thought perhaps something wasn’t quite right with her splints,” says Leila, “and we had heard LOC mentioned by other parents in a similar situation.” So, in December 2018, Leila and Barry met LOC’s Lead Orthotist, Sam Walmsley. “He had quite a different opinion from what we had expected,” Leila continues. “Whilst the care Lilac has received on the NHS has gone a long way to supporting her development, the only orthotic treatments they are able to offer have been off-the-peg solutions, making them inadequate for Lilac’s specific needs.

"Sam was not afraid to make new suggestions that complemented the care provided by Lilac’s core clinical team, and we liked that.”

After giving the matter careful consideration, Leila and Barry decided to add privately funded orthotics to Lilac’s rehabilitation programme, and they have been delighted with the results. “We’ve come to realise how vital the right splints are,” says Leila. “Thanks to the bespoke orthoses she’s received from LOC, Lilac now mobilises independently or with walking aids. The difference to her overall posture is phenomenal.” 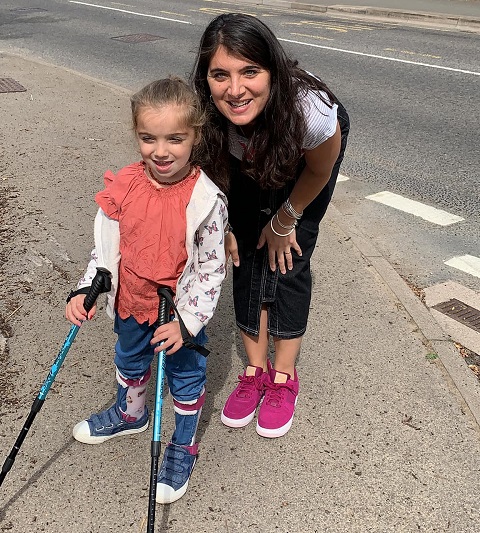 To help make that difference, Sam initially assessed Lilac’s gait pattern in LOC’s gait lab and quickly found that she was walking with hyperextension at the knee. “It was actually facilitating quite a stable gait pattern,” he explains, “but, in reality, she wasn’t able to use her quads enough to get the maximum strength potential at the knee.”

Lilac’s new custom-built ankle foot orthoses have changed all that, encouraging her quads to switch on and off at the correct time. As well as helping her gait pattern, this is important for strength. “A lot of children like Lilac do a lot of conditioning and physio for strength, but if the orthoses don’t support that then you’re only winning half the battle,” says Sam. “We were thrilled to hear at her last review that she’s grown in strength and stamina as a result.”

Lilac now makes twice-yearly visits to LOC’s Kingston clinic to check on her progress and Sam has even helped the family to find the right shoes to accommodate her splints. “We know the treatment is working because they have the gait lab and all the analysis equipment on-site to quantify her progress. So, we can see her improvements with our own eyes and that’s just brilliant,” says Leila.

On her last visit, Sam gave Lilac a pair of walking poles to replace her single-point sticks, which are helping her to walk more upright and with greater fluidity. He also liaises with Lilac’s physiotherapist, something Leila greatly appreciates as it provides a really inclusive approach to her treatment.

“Lilac just flits about now,” says Leila. “Every day she's getting stronger and our expectation now, with time and continued hard work, is that she will be fully functional and completely independent of all walking aids.” 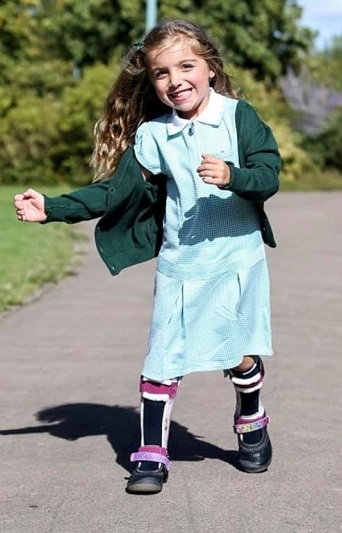 Now that Lilac is at school, and constantly on her feet, her prescription may have to change but Leila is confident that Sam and the team will be there to support her throughout. “We are absolutely with London Orthotics for the long haul now,” she says. “We’ve found a business that can provide what we need and who we trust, and it’s the trust that's the most important thing to us.”With a long-term plan in place and Lilac’s strength growing every day, she’s now turning her attention to her next challenge: life in the spotlight. As well as modelling for Primark and appearing in River Island’s 2019 Christmas advertising campaign, Lilac will be on your screens in 2020, playing David Tennant’s daughter in ITV crime thriller Deadwater Fell.

For a little girl who wasn’t expected to survive her first day, she’s certainly living life to the full!

If you want to support Lilac in her continued journey, you can find out about her parent’s fundraising drive and explore options to donate at Lilac’s JustGiving page.

Lilac’s fundraising drive is managed by a registered charity, Just4Children. Find out more about their work at the Just4Children website.