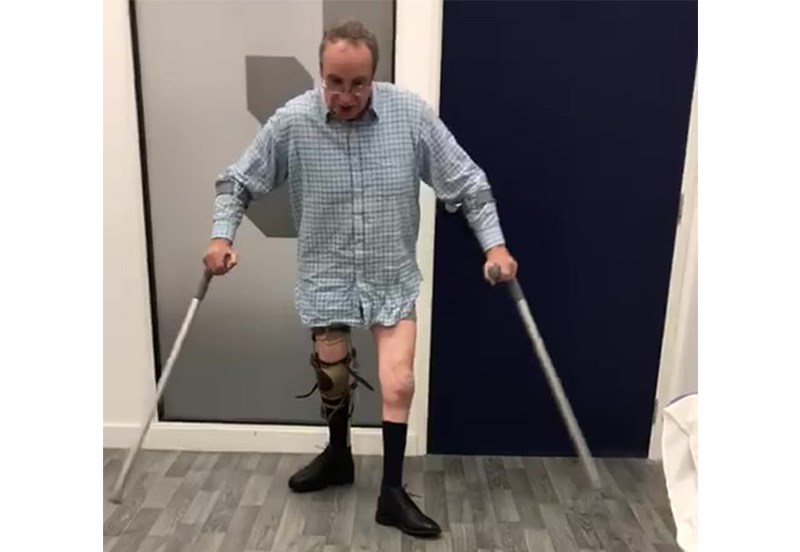 After contracting poliomyelitis, better known as polio, back in the fifties when he was just 18 months old, John Gates was left with slightly reduced muscle movement in his left leg and barely any at all in his right.

Polio is an infectious disease that can cause flaccid paralysis if the virus enters the central nervous system. And, like many children with polio at the time, John sustained permanent muscle damage that has required treatment ever since.

Now in his sixties, John has had to wear a calliper on his right leg (the left was not deemed damaged enough to warrant one by the NHS) all his life, as well as rely on crutches for support when walking. Constructed from metal with leather straps, the NHS calliper was rather rudimentary at first and extremely uncomfortable. He was eventually provided with thermoplastic callipers, but even these were problematic, frequently breaking at the straps or rivets that attached the leather to the metal. “The other thing that I found with them was the thermoplastic would gradually distort and the calliper would become increasingly uncomfortable,” says John, who often encountered painful rubbing of the skin and ankles.

Time for a change

John was growing frustrated by the need for constant repairs and finding it increasingly more difficult to get an appointment with the NHS, as a new system meant the usual Kingston hospital drop-in clinic had been replaced by a lengthy GP referral process. And, with every new pair of shoes he bought requiring expert adapting to raise the sole in his right foot, John decided it was time to look for another option.

With the LOC’s Kingston clinic not far from his Surrey home, John made an appointment for an assessment. At his initial consultation with clinician Sam Walmsley, he was able to try out a knee ankle foot orthosis (KAFO), made of carbon fibre – a much stronger, more lightweight material than John had been used to. Sam was optimistic that he could help John and arranged for him to be fitted with his own custom-made KAFO.

“When John came to see us, he was using one very heavy, old-style calliper on his polio-affected leg and he was looking to see if he could improve his gait pattern,” Sam explains. “The KAFO helps him swing his knee while walking.”

On assessment, though, it became clear that John is one of around 25-50% of polio patients who go on to develop a condition known as post-polio syndrome (PPS). As a consequence, John was starting to feel weakness on his ‘good’ side. So, to help counteract the effects of PPS, Sam recommended he also wear a lower leg ankle orthosis on his left leg.

“John was showing signs of weakness in his pelvis and down his other leg and he was getting too much knee flexion and ankle movement down that side. So, as well as the KAFO we built him a very lightweight, very strong construction with ankle joint to help him start to use his ankles more.”

This is important because, until now, John has tended to rely on what is known as a ‘swing-through gait’ in which he uses two crutches and swings both legs at the same time, plants his feet and then moves his crutches. It a fast movement but it’s not a typical gait pattern. By adding in the second orthotic, LOC has started to help John adapt to a normal reciprocal ‘leg over leg’ pattern, which will help him strengthen his ankles. “It makes his walking far more efficient and helps him feel more stable,” says Sam.

All of this has understandably taken a little bit of getting used to, says John: “At first, I found it quite difficult because I had adopted some very bad habits with the old calliper in that I didn't really attempt to walk properly. So, I had little or no muscle development in the thigh and meant I had very little stamina. I could only go about 150 feet before I'd feel quite exhausted.”

Now retired, John has the time to go walking frequently and has successfully built up his muscle strength with the help of the new orthoses. “I can go a mile without having to stop, so it is a lot better,” he says. “And, I’m walking in a regular pattern now.”

Unlike his old calliper that had two joints that could often go out of sync and break, John’s new KAFO has just one. John admits: “I was a bit worried at first as I feared that with just one joint it wouldn’t take my weight, but actually it's proved no problem.”

The constant soreness has gone, too, thanks to the carbon fibre frame’s cushioned lining, which means no more bare skin against metal. “The orthotic fits perfectly because LOC took proper mouldings and photographs; they were very thorough,” he says of his experience at LOC.

Another major benefit of the new design is an internal raise in the foot of the KAFO, which means John no longer has to get his shoes specially adapted. “I can buy regular shoes off the shelf thanks to the properly moulded footplates.” And, following the initial outlay for moulding and construction of his customised orthotics, he now just has them serviced by the LOC team twice a year to keep them in pristine working condition.

In the meantime, John’s determined to get the most out of his new kit. “I probably need another six months before I get the full range of benefits from my orthoses, but they are making a real difference.”

If you, or somebody you know, is struggling with the long term physical constraints caused by polio or post-polio syndrome, contact LOC to see how our bespoke orthotics could help.

Share your story and find out more about The London Orthotic Consultancy by following the LOC Facebook page. 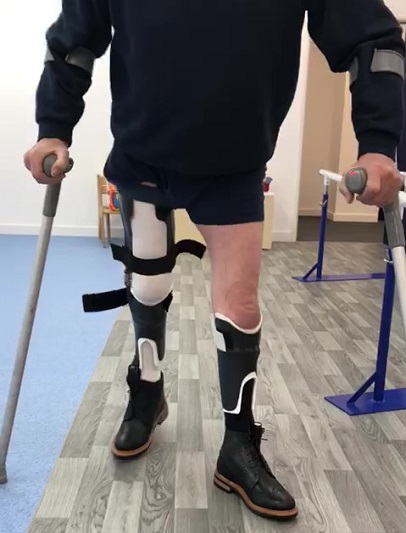