Six-year-old Amelia Moura was diagnosed with cerebral palsy after contracting an infection in her blood at birth. As her father, Paulo, explains, this brought on seizures, for which she was treated with medication for six months. But, within two weeks of coming off the medication, Amelia began fitting again; this time, experiencing severe grand mal seizures. “A bone marrow biopsy revealed the infection was dormant but still present, which is why the symptoms returned when we took her off the medication,” says Paulo.

More devastating news was to follow when it was revealed that the seizures had caused Amelia to suffer brain damage. As a consequence, she was diagnosed with spastic diplegia, a form of cerebral palsy that affects only the right side of the body. In Amelia’s case, the weakness is mainly in her leg and she began treatment with NHS specialists and physiotherapists at the East Surrey Hospital in Redhill.

It’s been a slow, ongoing process and has not been without its setbacks. “When Amelia was two years old, a physio told us that she may never walk in life, which really upset us,” says Paulo. Determined that this would not be the case, Paulo and his wife have worked hard with Amelia to help her learn to walk - which she did, albeit not unaided.

Amelia’s spasticity causes her muscles to tighten, which interferes with normal movement. And because of the weakness in her right side, she was putting almost no pressure on her right foot, instead of transferring all her weight onto the side of her left foot, meaning it wasn’t in the correct position either. As a consequence, Amelia requires ankle foot orthotics (AFOs), to control the position and movement of the ankle and correct the foot drop. However, walking, even with the help of a walker, was a constant struggle for this little girl. 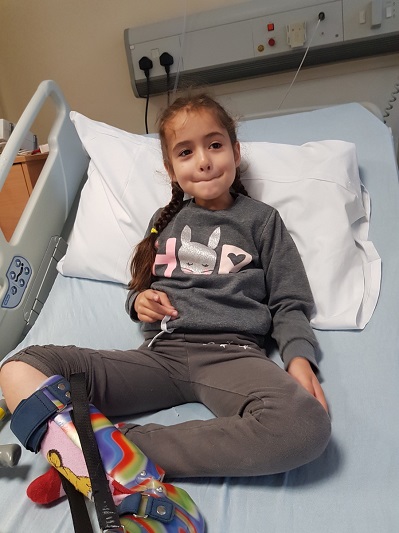 While her family were grateful for the NHS care Amelia was receiving, they felt her progress had begun to plateau. And, as Amelia approached school age, they were keen to help her become more independent. So, they decided to look for additional treatment, which is when they got in touch with LOC.

They met with our clinician, Sam Walmsley, who was confident that he and the rest of the LOC team could help Amelia. But, there was a problem. Taking the private route meant finding the £3,000 required for a year-long programme of treatment, including AFOs, physio and regular check-ups. Determined to do the best for his daughter, Paulo set up an online fundraising page and, through the generosity of friends and strangers, Amelia began her treatment with Sam when she was five.

“Amelia’s was an interesting case,” Sam explains, “because when she walked, her knees flexed too much, particularly on her good side. This actually gave the appearance that her left side was damaged, when, in fact, her more effective side was swinging the leg through, causing the hamstring to catch. This, in turn, pulled her pelvis round, affecting the good leg and meant she didn’t have the stability to hold up her left leg.”

To correct this, Sam says: “We had to equalise her leg lengths, get her balanced, but then also make her good side more stable than her affected side to try to help her stretch out the hamstring on the bad side. It’s quite complicated to work it all out and her AFO prescription looks all back to front, but she’s actually walking very nicely now.”

Amelia found the treatment quite difficult at first because, according to Sam, “we’re challenging her to keep her knee straight and get the affected side through without her knee on the good side collapsing.” But the effort has been worth it, as Paulo explains: “Since she’s had the new AFOs, Amelia’s walking has become straighter. She’s started putting the correct pressure on her feet and her balance has improved quite a lot.” 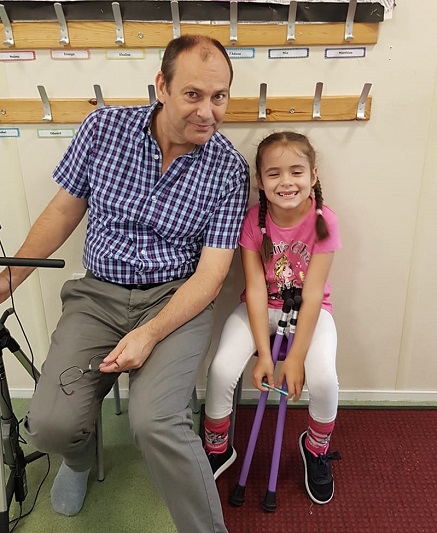 A year into her treatment, Amelia has made excellent progress. Instead of using a walker, she now only uses sticks and, even then, they are just a precaution. She continues to see Sam for adjustments to her orthotics. Those adjustments are made following examinations in LOC’s state-of-the-art  Gait Laboratory. With its sophisticated video equipment and highly sensitive measurement plate, Sam can accurately calculate the position Amelia is putting her feet in when walking and adjust her orthotics accordingly.

During her most recent review, Sam notes: “We’re seeing Amelia’s range of movement improving. I think we’re having a positive effect on the bigger goals we’ve set, but also her functionality, comfort and balance have all improved.”

Paulo is delighted with the results and, in particular, with Amelia’s growing confidence: “Before, she was always looking for something to hold on to, now she runs around,” he says. And, he’s been particularly impressed by Sam’s personal touch. “He really puts in that extra effort to make the clients happy.” For example, Amelia needs a new pair of shoes almost every month because she sometimes drags her right foot, so they wear out quickly. “Sam went out of his way to find cheaper options for us,” says Paulo.

As well as her orthotic care, Amelia undergoes an intensive programme of physiotherapy involving daily exercises and it’s this combination of treatment that Paulo believes has reaped the rewards. “I’d recommend LOC because they have all the equipment and extremely professional staff who have been trained by world-renowned physiotherapist Elaine Owen,” he says.

While Amelia continues to make progress, Paulo is keen for her to become even more independent. Typically, children with cerebral palsy get heavier but not stronger as they grow and can even lose their ability to walk. Keeping Amelia active is, therefore, a priority, so the family are continuing to raise money in order to be able to build a gym for her at home. 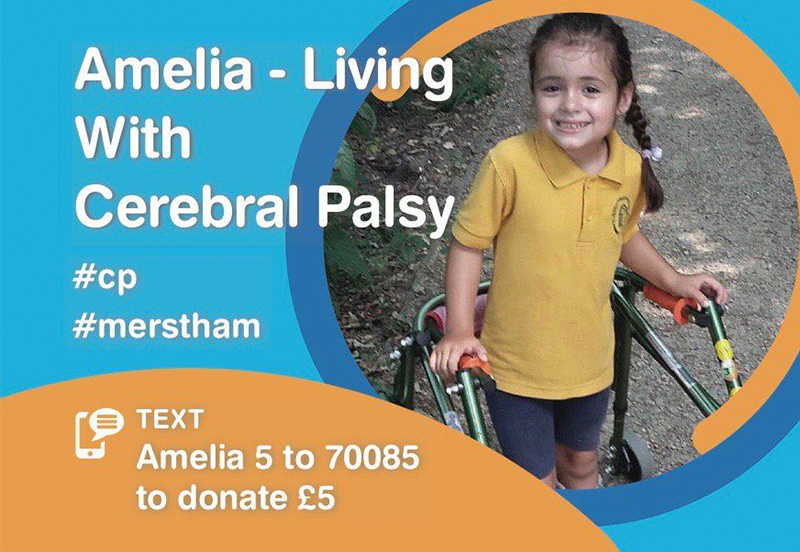 Amelia has never let her disability stop her from doing the activities she loves. She’s a regular swimmer and has recently taken up horse riding at a disability horse riding school. She’s a delightful child with a steely determination and we have no doubt that she’ll achieve all her goals.

If you would like to find out more about Amelia and make a donation to her treatment costs, visit her JustGiving page. You can also explore our range of bespoke paediatric orthotic treatments for conditions like cerebral palsy, or call 020 8974 9989 to book an appointment with a clinician today.

Amelia’s fundraising drive is managed by a registered charity, Just4Children. Find out more about their work at the Just4Children website.