World Cerebral Palsy Day falls on the 5th October 2016. In celebration, we’re delighted to bring you news of football-mad Jude, whose orthotics, manufactured by our own Alan Hews, are taking him from strength to strength both on and off the pitch. In 2015, Jude underwent SDR (selective dorsal rhizotomy) surgery at the Portland Hospital, thanks to the generosity of family, friends and well-wishers supported by Tree of Hope – a charity that helps families of seriously ill and disabled children in the UK to access medical treatment, surgery and therapy.

Jude, who has been diagnosed with cerebral palsy from birth, has always been a passionate football fan and dreamed of kicking a football himself. His dedicated father, Tony, used to drive him 100 miles every week for special training sessions for children with cerebral palsy. But it was a combination of SDR surgery at the Portland Hospital, our own orthotic care and his parents’ unerring dedication to his development that has given Jude newfound stability and strength, which he’s now using to hone his football skills.

Because SDR is not currently available on the NHS, Jude’s family took the huge step of raising £30,000 to fund the operation themselves, and with Tree of Hope’s help they hit their target. When it came to follow up care, though, Tony was concerned about the limitations of splints available on the NHS. “When we spoke to The Portland about this, they were very clear that part of the surgery package would be to put us in touch with LOC as their recommended orthotists. Alan came up to meet us at the hospital and he made us feel really relaxed – not just because of his knowledge and expertise, but also because he’s a fantastic character. We really feel that we can trust the relationship we have with him.”

Ensuring that children have the most effective rehabilitation programme after SDR can be a difficult landscape for parents to negotiate. The conventional orthotic opinion recommends that a post-operative patient be allowed as much movement as possible. Working in partnership with internationally renowned physiotherapist Elaine Owen MBE (MSc SRP MCSP), LOC is taking a different approach by providing very rigid support, closely guided by our analysis in the gait laboratory. 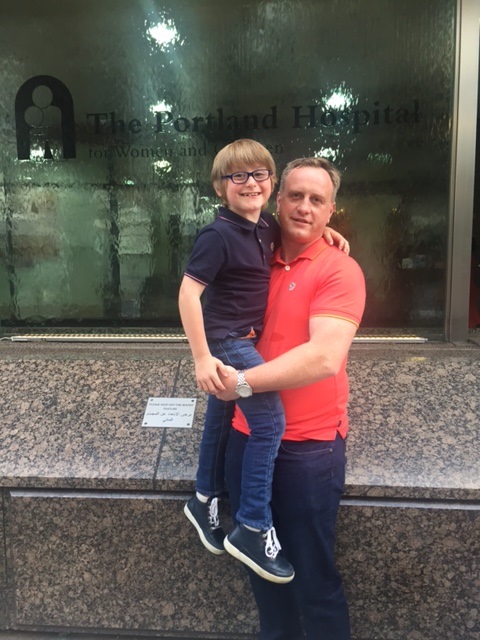 Early indications are extremely positive. We’re achieving milestone steps for SDR patients like Aran, who had never previously walked independently. For Jude himself, the result has been significantly increased stability and mobility – meaning that for the first time he can realise his dream of being a little star on the football pitch.

Now, Tony has set up a football team for children with cerebral palsy, to give Jude and others like him the chance to develop their skills and confidence. “I started with just six children in the team,” he says, “and now there’s twenty. The Portland Hospital sponsored a strip so the kids really feel they’re part of something. It's turning out to be really important not just for the kids but their families as well. One of the mums emailed me recently, to tell me about the huge difference the team is making not to her son. She said that being able to play football, to be a genuine part of a team, is boosting his confidence daily. That means a huge amount and, of course, it’s having the same benefits for Jude as well.”

Alan is also very pleased with Jude’s progress: “Jude is doing extremely well and getting more active by the day, which is a great result. We’ve made some modifications to his splints using the Gait Lab to assess his movement and, once he outgrows this set, we will work with his Dad to decide if another pair might be beneficial. That will be based on his activity levels and individual need. There’s no doubt that, in the right patient, SDR surgery has good results, but it is important for parents to know that it is not necessarily a magic fix without the right follow up care. There is a lot of rehabilitation and physiotherapy involved and, whilst not every post-SDR child will need orthotics, some do. Jude is a great example of how the combination of surgery, physiotherapy and the right orthotic treatment can have a transformational impact.”

Tony agrees: “We are absolutely delighted with Jude’s progress. And as he grows and gets stronger we believe there’s room for even more improvement – ultimately we hope he will grow out of the splints that have helped him so much, and become as independent as possible.”

To get advice on paediatric orthotics for post SDR surgery cases or any other condition, or to find out about orthotic treatments for cerebral palsy, contact LOC here.